As result of recent ecological movement, herbs have become a matter of public interest in Japan. Especially, the popularity of aromatherapy has risen, as we see from its frequent appearance in the media. Probably its popularity is based on people’s need for the new form of relationship with nature which needs to be established within today’s urban lifestyle in the near future.

Aromatherapy is a systematized theory which is of use for the human mind and body, using esential oil extracted from beneficial plants (=herbs) through the such methods as steam distillation.

Aromatherapy in fact is distinguished from other conventional herb-related activities (eg. gardening, pot-pourri, herbal teas etc.), since there is an effort made to prove its function based on the scientific research. 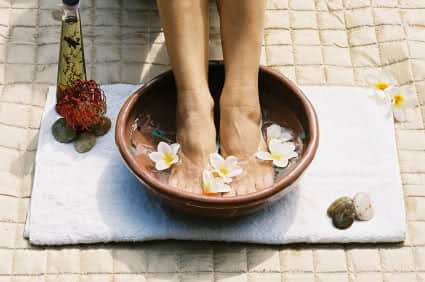 Indeed the natural system is so mighty that it would be difficult to explain everything trough science. Rather than simply turning our back on development and going back to nature, “living together” with the natural environment within the modern city and daily life is neccessary for our generation.

Aromatherapy is a prinerdial activity which acts upon the sense of smell, the last fortress against the virtual reality. It regulates fundamentally unbalanced human activities using the herbal fragrance.

The last fortress against the virtual reality

The sense of sight, hearing, and touch. They are already overcome by the virtual reality. The smell and the taste are still remaining. Fundamentally, the taste buds can only differentiate five tastes. Though there are indeed various pleasures for our tastes because of the smell accompanying the food. Playing the key role, the sense of smell is the last fortress towards the virtual reality.

As the new lifestyle with the computer becomes common, we start facing problems such as eye strain, lumbago, possible effects from the injurious electromagnetic waves. Everyone who has a computer at home might have experienced that difficulty in falling asleep immediately after stopping using the computer at 3 in the morning, unable to close their eyes. Still, attractive Internet is open 24 hours a day…

Here is the proof that we cannot switch our body on and off easily. It is a ironic matter that we are disordered by the digital computer world. I am thinking of the elemental structural difference between those two world. It can be explained that the digital world is structured based on the 0/1 repetition. On the other hand, I may say there is undulating wavy line between 0 and 1 in our body and mind, and the wavy line may de- or increase its wavelength beyond 0-1 span.

This “wave” can be explained from a kind of the energy “chi” in our dody, which unlike blood, cannot be explained by an anatomical approach. In China, It is called “Chi”, and in India, “Chakra”. These are all the concept that our mental and physical activities are created by that wave which is thought to be running through our body.

But there is a fragrance which is highly effective in changing ourselves between the “on” position to the “off” position. I would say that an essential oil can make the biorythm- wave smoothly.

Why is the olfactory system so outstanding?

Because the sense of smell is said to be stronger and has more direct access to the brain compare to the other senses such as sight, hearing, and so on. A stimulus of the smell reaches brain directly as an electric signal from the nose does not pass through the vain. so that it induces the reaction in very shot period of time, often by skipping our rational judgement.

Once we find a way to live within the digital environment without accumulating stresses, we can collaborate more with the computer. Further more it will be a possiblly to expand and increase activities up to a higher dimension. Could it be a clue for the positive view towards the next century?

Let us think about the common needs among the people, including myself, in the metropolis Tokyo. There are two vectors represented by the term “trance ” and “chill-out” for our mental and physical activities. In other words, excitement and tranquillity, tight and loose, strain and relax, or we may call them “Hare” and “Ke” in our Japanese Culture.

Philosophy of  Tight and loose

The philosophy which human body is fundamentally controlled by those two functions in visible in the Eastern, especially in Chinese toughts. Starting from the driving force of our life, heart-movement, those two functions are related to all our activities such as the muscle movement, breathing and so on . Also they influence upon our emotions regarding to the vain contraction. The vain shrink when we feel the tension or the cold, on the other hand, when the vain expands, our body feels warm and feels relaxed.

We have a concept that life have a contrast “HARE” with “KE” by an ethnological approach in Japan. “HARE” means it is the special bright (the word HARE comes from brightness in Japanese) situation out of everyday life in festival. And in this term, people have to enjoy completery to that bright situation for oneself. On the other hand, “KE” is the situation out of the HARE (the word KE comes from wicked, or darkness in Japanese). In this term, people had strict cobtrolled by village society to live soberly for giving a strong impressin on HARE situation. This two lifestyles are conform to the two vectors that I said above.

We need to control our emotion and physical body more positively between those two terms. Besides, sometimes we get bored of life if the wave does not make a big undulation and there is no change in our lifes. If we are facing and living with that nature, those changes in life can be obtained in appropriate cycles. You can feel not only summer or winter has come, but whether the water is cold or the wind is blowing. The traditional seasonal ceremony also can make our life more subustantial and enriched. There are many festivals dedicated to nature in Japan where people respect and love nature. We cannot organize these ceremonies as we live in big and busy cities like Tokyo. Besides, we spend all day long in air-conditioned modern buildings. It is not easy to feel and enjoy nature for people in the city.

Then, aromatherapy can be a helpful for recognizing specific situation. You can enjoy everyday life – You can forget about the papers piled up on your desk, things on your mind, and sometimes get rid of curiosity for the Internet you’re going to access tonight. The essential oil does not take much space nor take much time to use, because their effect is so direct – very useful by all means for the city living.

I can say that aromatherapy is like a partner, it helps you to face up to yourself in everyday life by keeping a balance between mind and body.

To practice aromatherapy, you can make herb-water and spray it on your body, put a few drops of oil in a bath tub and enjoy its aroma, , or you can use oils for massage.

Originally, aromatherapy was introduced from the West. Though its philosophy has extended to the whole world. I hope this article has shown my point of view.