Endometriosis is a disorder in which tissue resembling the inner lining of the uterus (endometrium) is found outside of the uterus.

Endometriosis is most commonly found on the lining of the pelvic cavity, the ovaries, uterus, on the rectum, the colon and the bladder. It can also be found on the small intestine, liver, spleen, lymph nodes, and in rare cases, elsewhere. If the endometriosis involves an ovary, a blood-filled cyst may develop. This is called an endometrioma, or you may hear it referred to as a chocolate cyst. It’s called a chocolate cyst because the old blood form is dark and appears to be similar to chocolate. These can vary in size from a pea to larger than a grapefruit.

Understanding Your Body
Located in the center of the pelvis, the uterus (womb) is a pear shaped structure. Inside the uterus there is a muscular wall that is covered by a tissue lining known as the endometrium. The endometrium is predominantly made up of mucus secreting glands and blood vessels.

During a woman’s reproductive years, she produces eggs, about once a month while menstruating. The ovaries also produce the hormones estrogen and progesterone. Both of these hormones signal the endometrium to build up in preparation for a fertilized egg to implant. If the egg is fertilized during its journey along the fallopian tube to the uterus, it implants into the thickened endometrium where it can receive nourishment through the blood vessels. If the egg is not fertilized, it passes out of the body, along with part of the endometrium. That is a menstrual period. And that is how the endometrium normally functions. 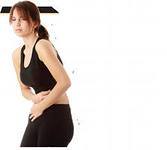 It is estimated that as many as 15 percent of all women of reproductive age have endometriosis. In women who have chronic pelvic pain or who are infertile, up to 50 percent are thought to have the condition. It can affect any woman, regardless of age, race or childbearing status. While the mean age at diagnosis is around 25 to 30, endometriosis has been reported in girls as young as 11. It is one of the leading causes of pelvic pain in women today. Moreover, endometriosis is one of the more common reasons why women have laparoscopic surgery (a procedure in which a thin scope is inserted into the abdomen through the belly button) and a hysterectomy (removal of the entire uterus) in this country.

Inherited traits and the immune system are important in determining which women actually develop endometriosis. There have been careful genetic studies done that indicate that daughters, sisters or mothers of patients with endometriosis are more likely to have the disease than other women.

The cause of endometriosis is not known for certain. Several theories have been developed over the last 80 years. However, no single theory described below provides an adequate explanation for the variation and range of locations of endometriosis.