Ronald Blakey: I’m actually an artist. . . and so I understand colors and how colors blend and how you can overlay serveral colors or blend several colors together to get an effect and so forth. Now granted, when I do this on the computer, I’m using pixels rather than pigments of paint.

Blakey constructs the maps using geological data. One series shows how the southwestern U.S. looked from 10 million to 1.8 billion years ago. According to the maps, this area has at various times been a shallow sea, a tropical island, and a dune field.

Ronald Blakey: I think that what these maps do — the maps that I create of the Earth’s past — is they immediately create an image that portrays a scene that needs very little explanation. . . . you can see here’s a mountain range — here’s the river system coming off the mountain rangehere’s the plains. . .

Blakey compares his maps to those made by meteorologists — who take complicated data about wind currents, air pressure, and humidity to create simple maps of Earth’s weather.

Blakey’s work is great fodder for the imagination. It’s hard not to think about what it would be like, for example, to stand on the shoreline of the ancient seaway that bisected North America in the Cretaceous. My home is in northern Arizona, which, according to Blakey’s maps, has at various times been a shallow sea, a tropical island, and a dune field. It’s fun to imagine what sort of animals and plants inhabited these ancient landscapes (and seascapes). 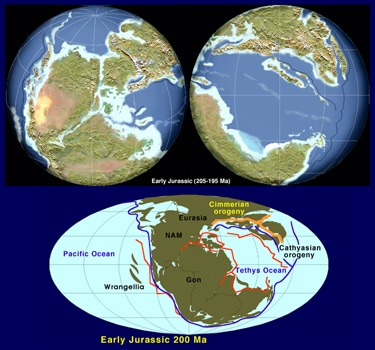 In addition to being fun, Blakey’s work is practical. He boils down complex geological papers into easily understood images for use in museums and textbooks. Petroleum geologists seeking to justify test drilling use his maps to point out probable petroleum-producing environments of the past. In other words, his maps take a lot of complicated data — that can only be understood by some geologists — and make it quickly and easily understandable to a wide range of scientists and the public.

Blakey’s maps also have some predictive power. Scientists can, for example, find in them mountain ranges of the past, and look to see what became of those ranges. They can then seek similar mountain ranges in the world today, and try to understand them by applying lessons from the past.

Excerpts from interview with Ronald Blakey:

“I try to make it look like one would see the Earth from some sort of high-altitude aircraft or satellite on a cloudless day.” 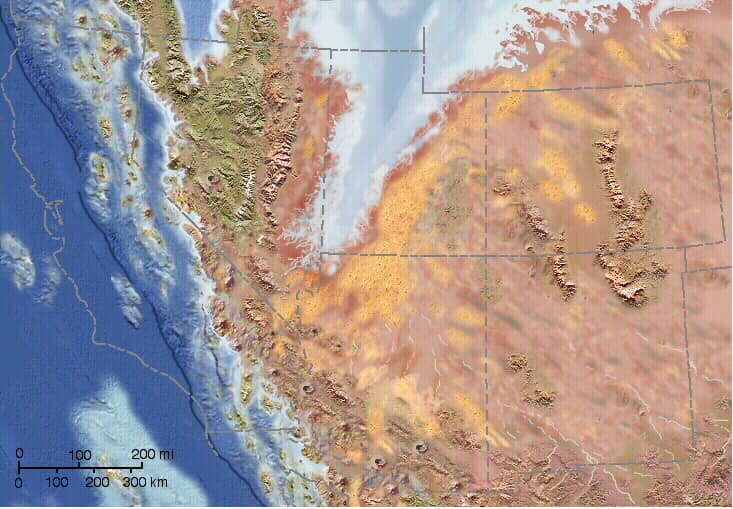 “I go to the geological literature, and from that literature I get various pieces of data that are suggestive of what a landform might have been like in the past.”

“. . . so, for example, if we have evidence of a river system in the rocks, we can reconstruct the pattern of the river — perhaps even suggest the type of bars that might have been in the river by the nature of the rocks. If we have a certain type of mountain range, the structure that is preserved in that mountain range may indicate what that mountain range was like earlier in its history.”

“I can use various tools in the programs that I use to create these maps that will blend colors or overlie colors or make colors transparent to things underneath them, and so forth.”

“By changing the colors you can give the effect of climate. I use warm colors — the browns and muted oranges and tans and so forth, for arid landscapes . . . and the greens for more humid landscapes.”

“I can actually duplicate with the computer mouse sort of what an artist does with a brush . . .”

“Keep in mind that scientists use models all the time. And what is a model? A model is a representation of a very complex scientific system and this could be chemistry or biology or geology or geography, or any of the scientific topics, we use modeling to try to explain what’s really going on. For example, when a storm is approaching, the weather people will model different air masses and air currents trying to predict what that storm will do. There’s no way that you can exactly document every aspect of that storm — it’s far too complex, so you use a model and generally that model eventually ends up on the t.v. screen as a drawing on the weatherman’s map. So in essence, that’s what I’m doing, I’m taking very complicated sets of geologic data that by themselves can only be understood by experts, not even all geologists, but just a certain field of geologist might be able to understand that data — but if that data can be transfered into a media, i.e. the maps that portray this information, we end up with a model. The map is essentially a model of what the Earth looked like in the Cretaceous or what the southwest looked like in the Permian or what northern Airzona looked like in the Jurassic or what Italy looked like in the Cretaceous and so forth. So we’re taking complex amounts of information and we’re trying to simplify them in a way that other scientists can look [at] this information and immediately glean the kind of information and knowledge that they need to complete their project.”

Predicting El Nino Oil For One, One For Oil
Scroll to top