Do you want to know what is ankylosing spondylitis? There you have the definition of this disease:

Ankylosing Spondylitis is an inflammatory joint disease. It is classified along with a number of other debilitating genetic conditions in a group called Spondarthitides. Unfortunately there is no cure for the condition – only management of the symptoms.

Spondarthritides is a group of inflammatory arthritis diseases where certain common genetic features are found. The following diseases come under spondarthritides:

These conditions all have common medical features that link them together. They occur as an abnormal response to infection in individuals carrying an antigen called HLA-B27, this is a predisposed genetic factor, the majority of persons affected with a spondarthritides disorder have inherited this antigen.

It has been identified in Reiters disease that certain infection trigger the disease. Bacterial dysentary and Chlamydial Urethritis. In the case of Reactive Arthritis it was found that the disease was triggered when individuals who had the antigen, were infected by Yersina enterocolitica. There has been no specific identification to an infection for Ankylosing Spondylitis.

The Condition of Ankylosing Spondylitis

Ankylosing Spondylitis affects more men than women at a ratio of about 4:1. The majority of cases are hereditory. First degree relatives of Ankylosing Spondylitis sufferers have an increased risk of psoriatic arthritis, inflammatory bowel disease or Reiters syndrome. The condition usually first appears between the ages 15 – 30.

The disease is always linked to another condition, for example; chronic prostatitis (in men), inflammatory bowel disease and psoriasis.

This disease is identified by the progressive calcification and stiffening of the sacro-iliac joint, the joints between individual vertebrae and the long ligament that runs down the front of the spine. In its basic form it could be associated to a chronic inflammatory arthritis.

The disease in its early stage is characterised by low back pain giving symptoms similar to rheumatoid arthiritis. The low back sometimes radiates into the buttocks and thighs.

Stiffness in the back occurs especially in the mornings or after a period of inactivity (driving long distances or sitting down for a while). The radiating pain can be confused with sciatic pain from a disc protrusion.

As the disease progresses in a minority of cases severe spinal fusion occurs giving the individual a hunchback or kyphotic appearance. This can also restrict chest expansion. Most cases do not experience great deformity.

In addition to the spine calcifying there can also be problems in other joints- Hips, shoulders and toe joints can be painful. The sterno clavicular joints (breastbone and collar bones) can also be affected. Plantar Fasciitis and achilles Tendinitis can also be secondary to Ankylosing Spondylitis. 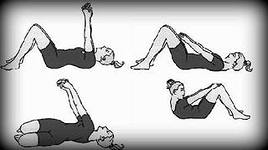 There are many other conditions linked which can affect an individual with Ankylosing Spondylitis making their ability to exercise very difficult. Because the disease is not smooth running it is difficult for an individual to follow a set exercise programme.

Although physical activity is highlighted as a major reliever of pain for Ankylosing Spondylitis sufferers it should always be followed with medical supervision and if necessary in conjunction with pain relieving medication and anti inflammatory drugs.

The physical therapy should be considered carefully as some exercises may exacerbate the condition. Maintenance of skeletal or spinal mobility is of prime importance and the prevention of deformites occuring.

Sufferers should avoid contact sports of any kind. Any knocks or bumps on the affected joints will not only be painful but may also cause more inflammation.

Correction of faulty posture is of prime importance, re-education of bed and chair posture is essential in conjunction with general mobility and light strenghtening exercises.

Swimming is good for cardiovascular conditioning as it decreases the stress put upon the joints. Be careful with breast stroke as slight hyperextension of the back may cause a little stiffness.

In cases of advanced AS, warm hydrotherapy may be necessary to improve mobility.

Beware of exercising in the cold – this can irritate Ankylosing Spondylitis and associated conditions.

Any ankylosing apondylitis exercises involving twisting the torso should be avoided. For example – Golf is OUT!