Renunciation is to put quality towards inner development and how much money you have or who your mate or friends are, the position of you body and such are secondary in importance. This makes you independent or separate. It makes your mind not grasp to the external. So if you get extroverted and emotionally caught up and go up and down and such. In that way you can say the mind starts to gain some sense of independence or control over it’s situation. 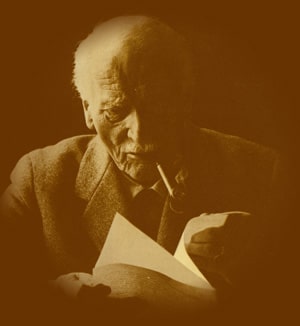 In Jungian psychology it is called the process of individuation referring to the process of realizing all of your relationships are projections of your inner psyche. And by doing that you realize when you have a big hang up about something or someone, that was a deficit expressed in a strong attachment to an external object. Therefore one has to go inside and deal with what is deprived within oneself and one then will of course loose interest in the external object and develop that which is deficient within one’s own personality. In that way you have the same result. With the process of individuation in Jungian psychology you have the same result. The realization is realizing your own psyche as manifesting off others around you and in that way you work with your own psyche all the time . Every time you have an emotional response or a strong response from an external object you should recognize this is indicating with my own mind. And therefore you do not cling to the outer objects. You rejoice in them for having mirrored something within yourself, whether it is a deficit or a positive aspect.

In the Buddhist path we refer to renunciation. In Jungian psychology it is referred to as individuation. Both of them are essentially the isolation of the mind away from the objects which normally delude it. In Buddhism you do not end up with hang ups with the material world, possessions, people, your own body. In Jungian psychology you realize your psyche as in being reflected by the various objects which your mind is drawn to as being indicators for where your mind is at.

It ends up that you become a person who has gained responsibility for their own existence. From that point, in Buddhism, you move forward toward bodhicitta. On a Hinayana style of realization of bodhicitta is trying to be loving and kind, to try to help others gain realizations. On a more profound level, the bodhisattva is on his own path. The path has to validate renunciation, it is not something separate. Therefore a bodhisattva’s activities is to try to inspire others into their spirituality which make them more realized and help them overcome their hang ups and develop better inner quality.

Psychology does not have altruism. If they developed themselves however, they should end up fairly altruistic anyway.

In psychology one would surmise that would be the goal sought after in the sense of having referred to it as union oneness. I am not sure they delve into going into various spiritual traditions for that. In Jungian psychology they talk about Alchemy, the marriage of the king and the queen. The marriage of Christ and the church. In that way they say the church is the bride and Christ is the bride groom. That is where psychology goes to in saying that there is to be some realization of the unification of the male and female. I don’t think psychology can explain it as clearly, but they certainly use examples and analogies to help identify it.

In Buddhism it is fairly clearly explained and therefore personally I find it more satisfying. But psychology can compliment it.