Like Japanese Bbuddhism itself,Japanese Buddhist art was a national variant of an international tradition.In Japan the Buddhist art forms that were periodically introduced from China and Korea were tempered in the crucible of local custom and usage ,to yield a rich tradition of religious art and architecture.

Buddhism was formally transmitted to Japan from China and Korea in the 6th century.The forms of Buddhism and Buddhist art that first arrived in Japan were chiefly those of the Mahayana tradition,a theistic and catholic system of belief that stressed universal salvation and that was to remain the underlying framework of most sects of Buddhist belief and practice in Japan through the modern era.

From its inception Buddhism in Japan engaged concern and patronage of ruling interests and became virtually a state creed.Temples and monastic compounds usually consisted of at least seven typical structures, including a to(pagoda),a main hall called the kondo (golden hall), a lecture hall called the kodo,and a kyozo or sutra repository .They were built as the seats of Buddhist worship and instruction. 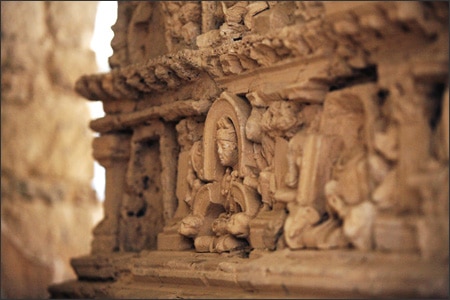 In the first wave of such construction, numerous temples were erected from the late 6th century to the early 7th century in what is now the Kyoto -Osaka region,most notably Asukadera,Shitenogi, and Horyuji.After Heijokyo(Nara)was designated the national capital in 710,a new wave of temple construction in the early 8th century produced the great NARA period(710-794)metropolitan monasteries,among them Kofukuji Daianji,and Yakushiji.

A tremendous amount of Buddhist art was commissioned for the halls and chapels of these temple complexes.Painting and sculpture representing various Buddhas,bodhisattvas,and guardian deities were the icons to which worship and ritual were directed.Important examples of such early artworks are the 7th-century gilt -bronze Shaka Triad(Shaka flanked by two boddhisattvas)and Yakushi ,attributed to kuratukuri no tori,at Horyuji;the 8th century gilt -bronze Yakushi Triad at Yakushiji; and the 8th century clay Nio at Horyuji.Realistic portraits of famous monks,such as the 8th century lacquer sculpture of Ganjin at Toshodaji, were also enshrined at teples.A corollary art form, that of the illustrated handcroll (EMAKIMONO) ,was developed for Buddhist narrative instrution.The oldest in this genre is the 8th century biography of Shaka called the Eingakyo.

The construction of Todaiji from 747marked the apex of classical Buddhist art and architecture in Japan.The temple’s honzon,or principal object of worship,is a colossal gilt-bronze image -measuring some 15meters in height-of the cosmic Buddha called the Nara Daibutu came to symbolize the power, wealth,and instrusiveness of state-sanctioned Buddhism.