When Cady Coleman went to college to study chemistry, she never dreamed she’d end up becoming an astronaut. A conversation with Cady Coleman

Cady Coleman is an astronaut who went to space for the first time in 1995, aboard the Space Shuttle. She says going to space wasn’t a life long dream. 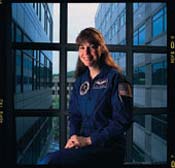 Cady Coleman: I was in college — I think I was a sophomore in college — and it had never occurred to me to want to be an astronaut because I think in my mind I knew what astronauts were like. And I have a picture of Mercury Seven in my mind of what I say is a bunch of old guys with no hair — and none of them looked like me. And then Sally Ride — Dr. Sally Ride, the first American woman astronaut — came to visit at my college, at MIT and just seeing her and hearing her talk made me think, “I want that job.” And it was the first time that it ever became realistic to me or even any sort of a goal.

She describes why the talk inspired her.

Cady Coleman: Well, Sally described what it was like to be in space and what her job was like and both of those things appealed to me immensely. And I was already studying chemistry and really loved chemistry, but have always liked more, maybe people involvement in my life and maybe just a little bit more multidisciplinary involvement in my life — and this job just seemed to have all of that.

In 1999, astronaut Cady Coleman helped deploy the Chandra X-Ray Observatory from the Space Shuttle. The satellite has helped scientists study black holes and massive star explosions. What it’s like to be an astronaut …

Cady Coleman: And I’m surprised at how addictive it is to go to space, how wonderful it is up there, and how much you want to go back.

Talking with Lieutenant Colonel Cady Coleman. She was a mission specialist aboard two Space Shuttle missions — the first in 1995 and again in 1999.

In space, she carried out experiments — including looking at how fuel combusts. Her work led to a better understanding of how pollution is created. She also tried different recipes for making crystals — possibly useful for computer chips and the design of future drugs. Now back on Earth, Coleman’s job is to interact with astronauts in space as a capsule communicator — or CapCom.

Cady Coleman: What I love about my job is that it’s not just one job — it’s really many, many different jobs. Sometimes I’m training to go to space. Sometimes I’m trying to understand what our crew needs up in orbit in the space station … Sometimes, I’m learning to be a photographer, sometimes I’m learning to grow plants. I’m learning about astronomy. … So that’s really what I love about it, that I haven’t had to decide what I really want to be when I grow up, because I have really lots of different jobs, all at the same time.

Cady Coleman began her career in the military before joining NASA. She said, “In my case, it was really more my scientific experience that I think was advantageous to the [astronaut] program. I have a doctorate in polymer science and engineering and was using those skills in the air force when I was selected for NASA.”

Coleman began astronaut training in the summer of 1992. She went on to be a mission specialist for two space shuttle missions — one in 1995 and the other in 1999. Now she spends much of her time as a capsule communicator — or CapCom — for shuttle and space station missions. She’s waiting in line for future shuttle missions, but isn’t sure when her chance will come up again.

In her first space shuttle mission, Coleman conducted a number of chemistry experiments — from crystal growth — to fluid physics — to combustion.

Excerpts from an Interview with Cady Coleman:

Life as a CapCom

And meanwhile, we all have jobs here on the ground. And my job is in mission control, being what we call a capsule communicator or CapCom. And that means that I am actually in charge of the folks that are talking to our crew up in space on the space station and on the space shuttle when we’re flying. And so I’m the liaison between the folks in space and the folks on the ground, kind of translating each of their point of views to each other so that we all understand what we’re trying to do.

As an astronaut, I think you’re a particularly effective interface because you understand what the people are doing up there, having been in space yourself. And you also understand, because you’re part of the mission control team, what we’re trying to do down here on the ground too. And sometimes when you hear something from somebody and they understand what you’re doing and who you, even when it isn’t something you want to hear, it makes it a little easier to take and to say, ‘we’ll, that’s not what I wanted to do, but I understand why you need me to do it.’

The Ups and Downs of Being an Astronaut

Well, I definitely miss being in space. And that was actually surprising to me in that it’s the goal of a lifetime to go to space and yet, it turns out, it’s very addictive. And everybody wants to go back and you never, ever get tired of going. And at the same time, I don’t want to spend my time on Earth being disappointed that I haven’t gone to space again. That would be terrible. And so I really just try to take every day at a time.

What’s really wonderful about the astronaut mission is that you have a variety of other jobs — the particular job that I have as a CapCom at mission control is one that I enjoy very much, because it uses a lot of skills that I think I have — it uses some people skills, it uses some technical skills, and it’s the next best thing to being up on the space station or being on the shuttle.

You know, it’s an incredible job. I love – I wouldn’t say I love every minute of it, because it’s a real life job and it has its everyday ups and downs and long days and short days and at the same time, it’s a very special job and I feel very lucky to have it. It’s a great job.

Having been to space, when you come back, you get busy with life back here. And you have to actually convince yourself that you’ve been there. And what I try to do is while I’m up there is to take a few snapshots, so to speak, mental snapshots of ways that I feel and pictures that I see out the window and have those in my head and I kind of go back to those. And when I heard the folks up in space talking about what it looks like looking out the window or what it felt like to wake up in the morning and not know which way is up. And I remember those too and it makes me smile and feel pretty wonderful. I won’t say that I remember them every single day and you do just get busy with life back here on Earth.

I would say at the same time, the biggest surprise and disappointment to me was how much I really loved being in space and how hard it was to not go back right away. And you know it’s disappointing not to go back again and again. But that’s not the way that the job is oriented and there are a lot of important jobs to do here on the ground. And so you have to take your turn doing those, and so I’m disappointed not to go back to space as often as I like. And I’m surprised at how addictive it is to go to space, how wonderful it is up there, and how much you want to go back. You would think that going once would be enough, and it should be, but it just isn’t.

What I love about my job is that it’s not just one job — it’s really many, many different jobs. Sometimes I’m training to go to space. Sometimes I’m trying to understand what our crew needs up in orbit on the space station and how to get it to them or how to manipulate the schedule to make it work for everybody. Sometimes, I’m learning to be a photographer, sometimes I’m learning to grow plants. I’m learning about astronomy. I feel like I could actually pick up any book in the library, read it and then be a better astronaut because almost every book in the library is going to apply to my work in the astronaut corps. So that’s really what I love about it, that I haven’t had to decide what I really want to be when I grow up, because I have really lots of different jobs, all at the same time.