For all animals, sight requires light. You can see only when light strikes an object — and bounces from the object into your eye. The light hits special receptors, which trigger nerve impulses — which your brain converts to a picture of the world.

Even cats can’t see in total darkness. But they don’t need much light — only about 1/6 as much we humans do. That might be why cats are such effective night hunters. In low light, a cat’s pupil — or the opening in the eye — expands to almost fill the eye. This lets in as much light as possible, so the cat is more likely to see its prey scurrying in the moonlight. 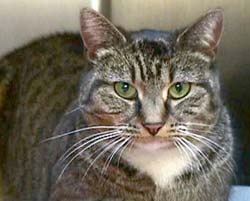 Also, cats have a reflective tissue at the back of their eyes known as a “tapetum”. The tapetum reflects about 130 times as much light as what’s reflected by the human eye. It gives the retina two chances to absorb any light that enters a cat’s eye. So in a way this tapetum acts as an image amplifier.

The tapetum also makes cats’ eyes shine at night — and this feature of cats’ eyes has given them a special mythology. For example, the ancient Egyptians believed that a cat’s glowing eyes continued to reflect the sun while it was hidden from human view.

More on the tapetum in a cat’s eye: When light passes through a cat’s retina, or the light-sensitive part of the eye that links up with the brain, it strikes the tapetum. The light is then reflected back through the retina again. This gives the retina two chances to absorb the light and convert it to a nerve signal, which the brain then uses to construct an image.

Although this tapetum might be helpful for the hunt, it’s done some harm to the cat’s reputation throughout history. Many cultures feared and shunned the cat because they associated cats’ eyes with demons and ghosts.