Crabapples are one of the most desirable small trees to incorporate into today’s smaller landscapes. They are easy to grow in zones 3 through 7, have a dramatic spring floral display, tolerate a wide range of soil and climatic conditions, and are readily available. However, they are often mislabeled, have messy fruit, have problems with the understock, and are frequently susceptible to a number of diseases that can make them aesthetically unattractive.

In an effort to select the most trouble free and aesthetically pleasing crabapple cultivars, evaluations were made at 25 test sites ranging from Canada to Mexico and from coast to coast. Grown at these test sites were 50 of the more desirable cultivars selected from the list of 1,000+ available cultivars. All of the crabapple cultivars were grown on common rootstock. Each cultivar was evaluated based on: disease resistance, form, and flowering and fruiting characteristics.

Apple scab, caused by the fungus Venturia inaequalis, favored by high humidity, is a serious disease. It causes spotting on leave and fruit that often result in premature and permanent defoliation of trees by mid-summer.

Apple scab can be controlled with fungicides. 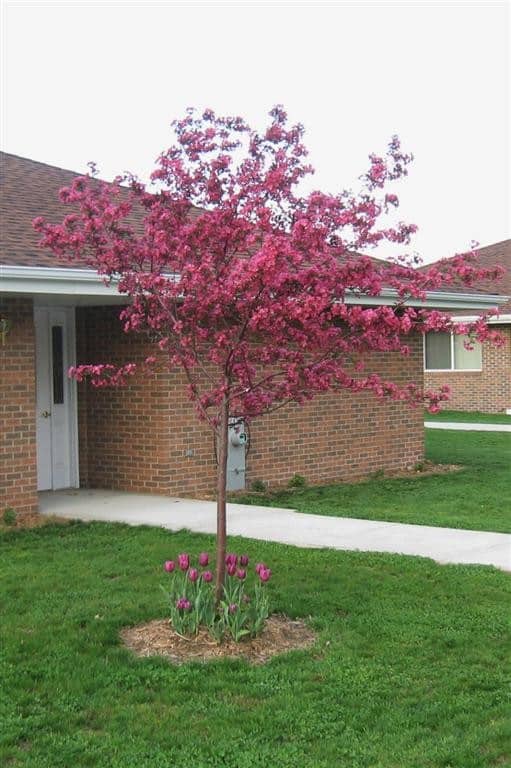 Fire blight, caused by the bacterium Erwinia amylovora, doesn’t occur as often as apple scab, but can cause dieback or death of crabapple trees. Infected issue appears to have been scorched by fire. The bacteria which causes fire blight thrives in warm, humid weather and is spread by insects.

Cedar apple rust, usually caused by the fungus, Gymnosporangium juniperivirginae, is a less serious problem and mostly affects leaves and fruit of native species, Malus ioensis and M. coronaria. It is active only in those areas where its alternative host, eastern red cedar, Juniperus virginian, is found.

With over 1000 different cultivars to choose from, it is possible to have crabapples that are shrub-like, weeping, upright rounded, spreading, etc. The crabapple cultivars selected will depend upon garden size, planting site, and adjacent plants.

Fruit size varies from 1/4 inch to more than two inches in diameter. Fruit larger than two inches in diameter is no longer considered crabapples. Fruit color may be yellow, orange, or red, with bright red being the preferred color. Cultivars have been selected for fruit that persists well into the winter. Since fruiting occurs only when the crabapples bloom, some cultivars fruit on alternate years while others fruit every year.

Since crabapple flowers remain open for only one to two weeks, flower color progression from bud to bloom is very important as is bloom abundance and the desire to which blooms are borne along the branches. Flower color may vary from white to pink to red and color may change dramatically as buds mature to open blossoms. Red buds may open to pink flowers and pink buds may open into white flowers.

Mark McGuiness of the National Arboretum suggests the following crabapple cultivars for the greater Maryland region: