Megalosaurus as depicted by Richard Owen in 1854, who came up with the name dinosaur.[/caption]The first dinosaur fossils were probably found in China as early as the fourth century – only they were referred to as dragon bones. It wasn’t until 1824 that the first dinosaur was scientifically described by British geologist William Buckland. A lower jaw of the meat-eating Megalosaurus or ‘big lizard’ was uncovered in Oxford, England. The next year, British medical doctor Gideon Mantell described the herbivore Iguanodon. “Those are the two first hints that dinosaurs existed in the scientific literature,” says Hans-Dieter Sues, vice-president of collections and research at the Royal Ontario Museum in Toronto. 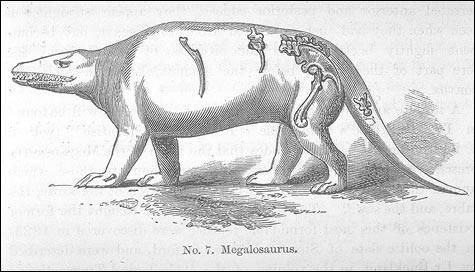 While the first bones were unearthed in England, the first dinosaur hunters – people who systematically excavated sites for dinosaurs – were American. Researchers Edward Cope and Charles Marsh were two independently wealthy men who were fascinated by the giant creatures. Their passion for the extinct reptiles, however, turned their friendship into a bitter rivalry and ruined them both financially.

“They both started working on dinosaurs from New Jersey where they had been discovered in various coin operations,” explains Sues. As bones began being unearthed out in the American west by prospectors and military men, “they realized that there was all this neat stuff out there, and they both mounted expeditions.”

The West was a treasure trove of dinosaur remains. “For instance, there was a place in Colorado, where they found these huge bones sticking out of the rock. And they just set up camp and just started quarrying out these bones. And they realized these big leg bones attached to other bones, and those bones to skulls,” explains Sues. “Slowly they were building up all this material that showed that there were all these gigantic creatures during the Mesozoic.”

The media began to take a keen interest in the fantastic discoveries. Cope and Marsh furiously sought to find and name as many fossils as possible, the glory of fame attached to each find.

“In typically guy fashion, they just tried to outdo each other. In fact, they stopped at nothing. There were reports of gun battles between the collecting crews out West. They would steal each other’s specimens. Marsh, in particular, was a very suspicious individual. After a while, Marsh (who was a professor at Yale University) wouldn’t let Cope into his university any more.”

Only death ended their rivalry.

“They completely bankrupted themselves. They literally burned, in modern terms, tens of millions of dollars on collecting fossils.”

Since those early days in England and the American West, dinosaur bones have been found on every continent. Fossils were unearthed in western Canada, then Africa and central Asia. Today’s hotspots are China – where the famous feathered dinosaurs were found – and Argentina, home to the largest dinosaurs that ever lived.

“As new countries are explored, whole new repositories are found,” says Sues. “There’s no end to it.”