A story about winter forage for the Rocky Mountain elk of Montana.

During the summer, elk use a variety of habitats at different elevations. But winter snow cover limits their food, primarily to bunchgrasses found in valleys — valleys that are often encroached upon by human development.

And there’s an even more immediate threat to elk forage — invasive plants like spotted knapweed. These weeds displace the native bunchgrasses that elk eat. 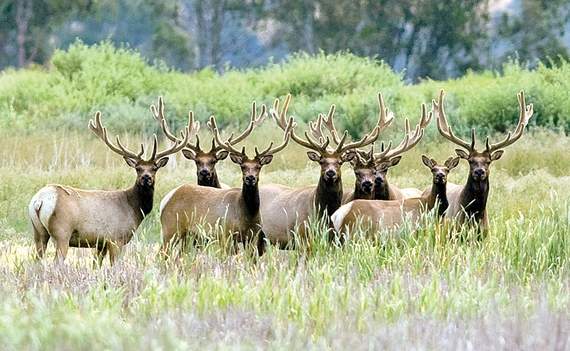 A pilot program chose to use an aerial application of herbicide by helicopter. It targeted the weeds only, and it’s said to be not harmful to the elk. Here’s Sandy Kratville, Wildlife Program Manager for Montana’s Lolo National Forest.

Sandy Kratville: What we’d like to see on the national forest is an increased ability to provide the forage that the elk need in these areas over the long term, over the next 50-100 years we’re looking down the road.

There is concern for nearby streams, and for whether precautions are adequate to avoid water contamination. Meanwhile, in the test area, 98 percent of weeds were diminished, and the bunchgrass — food for the elks — increased seven-fold.

Excerpts from the interview with Sandy Kratville:

“Bunchgrasses are pretty easy to visualize — they look just like they sound. They grow in a clump, instead of spread out like in your front lawn. There’s different sizes. We have Idaho vesue here, we have rough fescue, Junegrass, and they’re different in texture and in color. Sometime Idaho fescue has kind of a blue tinge to it. They send up stems that can be two, sometimes two and a half feet tall. But the base is fairly close to the ground. And the bunchgrasses are spread out across the open area. Usually, they’re pretty acessible to big game animals like elk. What happens with invasion of noxious weeds, is that in any area where it’s open, or where there’s that soil is accessible, the knapweed will put down roots and it out competes the native bunchgrasses and the native forbes. Forbes are also mixed in on these native bunchgrass ranges, and they also can provide some forage for the elk if they can get to it during the winter. Usually in the winter the forbes are not as available as they are at other times of the year — the spring and early summer.”

“I can tell you about the Mormon Ridge Project that was done, beginning in 1997, and then I can also tell you about some projects that we have in the future.”

“The Mormon Range area has winter range that is relatively small. It consists of approximately of 500 acres of open bunchgrass habitat and another 400 acres that has been grown in with Douglas Fir trees. And the winter range supports about 50-80 elk, and forage is limited primarily to the bunchgrasses. The elk herd really have no where else to go that will provide adaquate winter range because we have subdivisions and private timberland and ranch property that’s adjacent to this winter range. And, even if they could move to an alternative winter range if they had one close by, there’s research that shows that elk, especially the cows, have a high fidelity to their original maternal winter range. And these elk would not move elsewhere anyway. So it’s probable that if a percentage of the bunchgrass is reduced, or completely removed, it will reduce the elk herd or it will no longer exist. So what we did with the Mormon Ridge Weed Project was apply herbicide aerially, from a helicopter, and the herbicide was called picloram. And we applied it to about 430 acres of the winter range. And we did it that way, primarily because this area is relatively inaccesible by road and it has various topography that include some very steep side slopes. And again, the most prevalant weed there was spotted Knapweed, but we also had some leafy spurge. And about 80% of the grassland was burned in April of 1997 to remove the Knapweed skeletons. The skeletons remain after the winter, so they look like dead plants. A portion of the plant really is dead, and then you have the green part of the plant starting, essetially, over from the roots every spring. We burnt the skeletons, and hopefully increased the vigor of the grasses. And then in June we did an aerial application from the helicopter. And then again, in the fall of 1999, we did another aerial appication of herbicide. And these treatments were not done just by the Lolo Forest, but we had partners in this project at that time, the Montana Fish, wildlife, and Parks, and the Rocky Mountain Elk Foundation, and also the National Fish and Wildlife Foundation. So, it was a coordinated effort. We did monitoring before and after the project. We measured the weed, and the forbe, and the grass biomass. And the production was calculated using a Clip and Weigh method. We also analyzed the compostion of the vegatation that grew back after the treatment. The before and after comparison were very dramatic for this particular site. If you have a heavy infestation of spotted knapweed, and you do this tratment, you are likely to see this in other sites, not just in the area that we did it in. And in terms of production, which is the change that you’re likely to see in one vegetation type, for instance noxious weeds, the change in pounds per acre before the treatment as compared to the pounds per acre after the treatment. For weed production, we had a decline of 98%, or 1075 pounds per acre, 22 pounds per acre after the first herbicide treatment. And in terms of grass production, the grass production was astounding. It increased 714%, from 350 pounds per acre to 2800 pounds per acre after the second year of treatment. So, it was a pretty dramatic shift from the predominance of weeds to the grass production. And we also had a change in the forbes composition. Initially, the forbes composition did decline, but it is now returning to the treatment area.”

The method that we chose, again, was primarily because it’s not easily accesible by roads. It was a fairly large area, as far as trying to treat the acres of weeds. And the topography was fairly steep and rough. So if you try and do it by hand, it involves a huge investment of time, which subsequently transfers into an increased cost. There’s other treatments for noxious weeds, and those include hand-pulling weeds, mowing weeds, grazing by sheep or goats. Lots of experiments going on at the time, and we’ve used biological agents. Those are parasites, or predators and pathogens that act on the plant or the seeds. So there’s a variety of options. We chose the aerial application of the herbicide because it is very effective and there are lots of areas in lots of forests that need treatment. So we need to be able to be effective over large areas, and most of the other methods don’t allow us that level of effectiveness over these areas. And in terms of the long-term, what we’d like to see is to maintain or improve these winter ranges. We have, as I said, approximately 15% of the forest is winter range, and those areas are very important to the elk in the winter. They don’t have a lot of other places to go. In historic times, before there was a lot of human development in the valleys, there were elk that moved down into the valley areas and used those areas for winter range. And they still do that, in some cases. But they’re finding more and more conflicts with humans at those elevations during the winter, and there’s less and less forage available to them because we developed those areas and they’re under other uses, essentially. So they’re not available for winter range.

“What we’d like to see on the national forest is an increased ability to provide the forage that these elk need over the long term, over the next 50-100 years we’re looking down the road. And this is not a one-time treatment. In many cases we will have to return and treat these areas 2 to 3 times, possibly 4 times in order to keep the seed source from returning.”

“Noxious weeds are easily transferred to areas that have open ground where possibly the ground has been disturbed with fire, where there’s open ground. Where plants have been removed from the site by some mechanical reason. Any opportunity that a noxious weed has, they seem to move in and take advantage of those sites. A lot of times the transfer can be off the bottom of a vehicle on a road. In many cases we have seen that the noxious weeds are much worse right along the edge of roads than it is farther out away from roads. There are also seeds that are transferred on the bottom of hikers boots, on pant legs, or on the fur of wild animals. Dogs, if you take them on a leash on a recreation trail, they can transfer seeds. Some of them are airborne. There’s a multitude of ways of transferring the seeds of these invasive species. And because a lot of the native species do not have defenses against these species, they’re easily out-competed by these aggresive weed species. So it’s a combination of factors that makes it fairly easy for these species to spread. ”

“Elk are very adaptable animals, and during the summer they can use a variety of habitats at a variety of elevations. And they do very well. In the last hundred years, elk have really expanded their range, not to levels beyond their range prior to humans, and people in the United States, but they have done very well. Summer range is not limiting at this time in most areas. What is limiting is their options for winter range, again — because they need to move down to lower elevations, often with south facing slopes so that they are able to feed on the available vegetation. And if it’s a bunchgrass winter range, they’re trying to move to areas where the snow is not deep enough to cover the plants so that they can get to the forage. If they’re on winter ranges that have shrubs, and the snow gets fairly deep and they can’t get to the grasses, then they can use the shrubs. But if there are no shrubs then they’re pretty much out of luck. So the winter ranges are definitely the limiting factor for elk herd in many areas of the Western United States. And so we’re very concerned and very optimistic that we can maintain those areas because they are so crucial to the continuation of the numbers of elk that we currently have.”

“Some of the questions that we often receive are, “how will these herbicides affect wildlife or fish in the area? And how will they affect the forbes? Because the do have the potential for some negative effects. However, we are using herbecides that are very low in concentrations we use. We also put out what we call cards that show where the chemical is located on the ground. We can tell how close or how far away we were from any areas that we didn’t want to spray, including streams or areas of special vegetative nature. We try and protect any sensitive or rare plants that might be in the area when we spray. And so those types of questions, and are the measures that we take adaquate, those are probably some of the biggest questions that we have related to herbicides and this type of treatment — and they’re logical questions.”