Since the 1870s, paleontologists have theorized that birds are descended from feathered dinosaurs.

Until recently, no dinosaur fossil was clear or complete enough to prove it. Then in 1996, an amazing fossil was found in China. Mark Norell — a curator at the American Museum of Natural History in New York — saw the fossil in Beijing.

Mark Norell: They just opened the drawer and I really just couldn’t believe it, because, you know, here was an entire animal of a dromeasaur just laid out that was just completely covered with feathers. I mean this animal was just preserved as if it were alive. Not only could you see that it was associated with feathers, but you could see exactly where the feathers went on the body and that there were different types of feathers on different parts of the body, just like there are in modern birds. 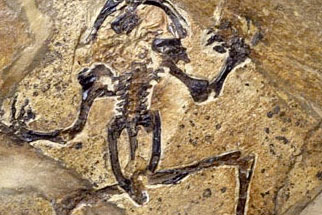 This fossil — and others that followed from China — show characteristics we think of as specific to flight — feathers, hollow bones and wishbones. And yet it’s generally believed that those dinosaurs didn’t fly. Norell and other paleontologists are still trying to understand how dinosaurs evolved into birds.

This past January, researchers announced the discovery of a dinosaur fossil with four feathered wings. It’s thought this dinosaur might have glided from tree to tree.

Mark Norell, the interviewee, is the Chairman and Curator of the Division of Paleontology at the American Museum of Natural History. According to his biography on the American Museum of Natural History homepage, he is “currently… working on the relationships of small carnivorous dinosaurs to modern birds, naming new dinosaurs, and attempting to develop new ways of looking at fossils using CT scans and imaging computers.” Dr. Norell has worked all over the world, including in Patagonia, Cuba, the Chilean Andes, the Sahara, West Africa and Mongolia.

We sent this script to Brian Chatterton, a professor of paleontology at the University of Alberta in Edmonton, for review. He responded, “It does ignore Archaeopteryx, the bird genus that is older than all of the feathered dinosaurs from Liaoning, and that almost certainly could fly by flapping its wings. The Chinese species are important because they show that some dinosaurs definitely had feathers and down, and they formed a wild array of forms that can be interpreted as intermediate in form (not time) between dinosaurs and birds. They are relevant to the debate on whether bird flight originated in a “cursorial” or “gliding” fashion (actually I think different Chinese forms appear to support both of these competing theories). These Lower Cretaceous Chinese feathered dinosaurs co-existed with birds that flew by flapping. I think it interesting that such primitive appearing forms that look like intermediate stages in this transition from birds to dinosaurs (or even possibly from birds back to dromaeosaurs) co-existed with what appear to be efficient flying birds. They must have survived for some time (many million years) after the actual transition took place. I think that there is an interesting story there – rather like a bunch of Australopithecus occurring among modern man (perhaps more equivalent, actually, to the large primates – gorilla, chimpanzee, orangutan, that do co-exist with us today). This aspect of the Chinese feathered dinosaur story is also interesting, and largely ignored.”

I also spoke with Phillip Currie, the Curator of Dinosaurs at the Royal Tyrrell Museum of Paleontology in Alberta, Canada. In our interview, he explained the history of the theories about feathered dinosaurs, their discovery and the continuing research on them:

“The idea that dinosaurs might have feathers isn’t particularly new… it’s an idea that developed in the late 70s, early 80s. The idea developed because at that time people realized that anatomically birds and dinosaurs are very similar to each other and it caused people to start thinking that maybe dinosaurs after all were the ancestors of birds. It was actually an old idea that had been presented in the 1870s first, but it had been largely forgotten over the intervening century or so.

“Yet with the discovery of these small meat eating dinosaurs related to Velociraptor, it became quite evident that birds and dinosaurs were very, very close to each other. It was also the time when… people started thinking seriously about dinosaurs being warm-blooded animals. Bob Baucher, who was at Yale University at the time, put forth an idea that wasn’t entirely his own, but that he championed more than anybody else… that suggested that because these small meat-eating dinosaurs were warm blooded, they had to have some kind of insulation on their bodies, and if these animals in fact were the ancestors of birds, then it made sense that the insulation covering their bodies was probably feathers.

“Everybody already knew of course that birds could not have just sprouted feathers when they decided to fly. That is something that happens over a long period of time, so birds had to have had feathers to adapt them into a mechanism for flight. So the feathers must have been around in the ancestors of birds and it made sense that if dinosaurs were those ancestors then the dinosaurs must have had the feathers. So, already in the early 1980s there were many artists who were drawing dinosaurs with feathers on them.

“But still, nobody really expected they were going to see a feathered dinosaur — at least I certainly didn’t expect to see one, even though everything said to me it was a logical argument that was probably true — to be so lucky to find a specimen that was so well preserved as to show feathers just seemed beyond anybody’s imagination at that time.”

Currie was in China at the time the news of the first feathered dinosaur was released in the Chinese media. He describes going to see it:

“So when the first feathered dinosaur was found in China I was in China at the time…I didn’t put much stock in it but I arranged to go and see the specimen anyway. I really figured that the feathers weren’t real so I didn’t get excited about it until I saw them, and when I saw them I became a believer instantly because the specimen is so well preserved that it was very hard to attribute it to anything other than some kind of feather-like structure on the outside of this little dinosaur.

“So the first [feathered dinosaur was discovered in] 1996, and that sparked a lot of argument. There were people saying… that it could be fungal growths, it could be dendrites, it could be just the way the flesh has deteriorated and ended up in very stringy muscle fibers, or collagen fibers or something else. So the arguments were going back and forth on that for… about 2 months. And then the next specimen was found. And the next specimen had feathers that clearly were feathers, and the trouble with that specimen was that it was damaged. And so the feathers, even though they were on the same slab as the dinosaur skeleton, there was a break between the tops of the feathers and the skeleton itself. So people said, ‘Well, that’s clearly a dinosaur, and those are clearly feathers, but there is probably a bird crushed underneath that dinosaur and you are just not seeing it.’

“And then more specimens got found. That was the one that I got involved with it was an animal called Caudipteryx, and there is absolutely no doubt about it, the feathers go right to the base of the tail and they are behind the arms and there are many specimens now of this animal and there is no doubt at all that these are bird-like feathers and that this animal is a dinosaur of a sort.

“What it did was spark a whole new set of arguments and the arguments in this case were, ‘Well, yes it has feathers, and it looks like a dinosaur, but clearly if it has feathers, it must be a bird that looks like a dinosaur.’ In this case, though, it was really starting to become a little bit silly because Caudipteryx was an animal that anatomically had characteristics that weren’t supposed to be found in birds and were clearly dinosaur level characters and at the same time there was no doubt about these things being feathers on the animal. So regardless of whether you called it on the bird side of the line, or the non-bird dinosaur side of the line, it was a little bit irrelevant, because it was the bridge between the two animals.

Later, he explains the way the research has developed since the discovery of such a vast number of feathered dinosaur and early bird specimens in the Liaoning Province of China:

“The Liaoning site’s actually been known since the 1930s. The interesting thing is that when it was discovered it was known as a very good place for producing fossil fish and fossil insects. Farmers have been digging up that area for many, many years. But it was only in the mid-1990s that the first fossil bird was found there. That was sold to one of the museums in Beijing… and so they started launching expeditions going there… then of course, the people who found it who got money for their discovery intensified their quest for finding the birds, because obviously the birds are worth a lot more than 100-million-year-old fish because there are millions of fish and not that many birds.

“Before we knew, we were finding that a tremendous number of fossil birds were coming out of China… So many in fact that it was estimated over 1000 of these 120-million-year-old birds had been discovered in that short period between 1994 and 1996.

“The first interesting thing about this material is that the most common bird there is called Confucius Ornis and Confucius Ornis is, next to Archaeopteryx, one of the most primitive birds that we have good fossil material for. It’s extremely well represented by a huge number of specimens. Having this amount of material available to us opens up lots of possibilities for studying the animals that we didn’t have before on early bird material. Now we’ve got juveniles to adults of this one type of bird, and we’ve got all types of material that indicates there is sexual variation… just like modern birds. We can start looking at growth rates… by studying the bones, we can estimate how old the animals are and then extrapolate that information into the specimens themselves and see how fast the bones are growing and changing and do comparisons between that and modern birds checking out their physiology…

“Its all done because there is a lot of material there that’s — its not being sacrificed by any stretch of the imagination, but with so many specimens you do get some specimens that are not of the same quality as far as display material but which would be good for say, cutting up and looking at it under a microscope.

“What we don’t know still is anything about the origin of feathers and the origin of flight. These are the kinds of things that ornithologists and paleontologists have talked about and argued over for more than a century. So far, there has been very little evidence that you can base these theories on. Now we have many different stages in the evolution of feathers and probably many different stages in the evolution of flight. So the focus is largely shifting to feather origins and flight origins.”