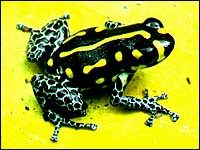 High above the jungle floor, a howler monkey is breathing its last breath. Moments ago it felt fine. Now, however, thanks to a poison-tipped dart lodged into its leg, it feels numb and disoriented. It is having trouble breathing and its movements are laboured. Seconds later, it loses its grip on its perch and drops limply to the ground below.
Not a nice way for a monkey to go, but it may be that the very thing that killed this animal could save human lives in the future. And a huge class of brightly coloured frogs may be behind it all.

They’re known generally as ‘poison-dart frogs.’ That’s not the best name for them since there are many hundreds of different species of these beautiful but noxious animals. Yet only a handful are actually used by humans to make poison-tipped darts. 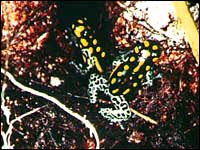 However there is no doubt that, besides their gorgeous looks, these amphibians are united by their remarkable ability to avoid getting eaten by predators.

They all produce a highly toxic mixture of chemical in their skin that escapes only when the animal is attacked. The chemicals are all different. Sometimes they just taste bitter. Sometimes they produce a deep burning sensation. Very occasionally, they can even kill a predator dead.

Dr. John Daly has made a career out of following these creatures. He’s the head of Pharmacodynamics at the U.S. National Institutes of Health. He specializes in the finding useful drugs by studying the complex chemistry of other animals.

Daly says the chemicals in a poison-frog’s skin are more than just toxins – they are vast storehouses of the chemicals that all animals, including humans, depend on for their nervous systems. In fact you have these same chemicals in your body right now.

But there are two major differences. First, what these frogs have right below the surface of their skin, we have locked deep inside our bodies. Second, the frogs have several hundreds and even thousands of times more of these chemicals in their thumb-sized bodies than humans do. These two features are what give this frog such a fantastic defence against predators. 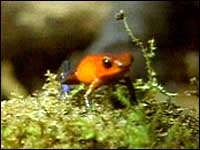 “Usually the predator spits the frog out immediately because it causes a burning. Then the animal will spend a good deal of time trying to clean its mouth out, or the snake will be gaping and rubbing its mouth in the dirt trying to get the burning out.”

And it’s not just a threat for predators. During one expedition in the 1970s, he discovered a new species of frog. When collecting the frogs, some of the toxins managed to spray into the air off the frightened animals. 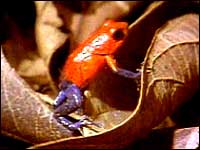 “There was enough of an aerosol that even though I was wearing a mask and goggles my eyes started watering and my whole face was numb from the little bit of poison that was getting through,” Daly says.

Daly named the frog Phyllobates terribilis (terrible frog). He now estimates there is enough toxin in a single one of these creatures to kill 100 to 200 people. Just touching it could kill you. It’s considered by many to be the most toxic creature ever found.

But far from being a simple curiousity, these frogs have a direct and vital role to play in human medicine.

And, amazingly, scientists have already found one chemical compound that’s many times more powerful than the opium-based pain-killer morphine but has virtually no unwanted side effects.

The story of the poison-dart frog continues: