It’s no accident that what may be the world’s best-preserved mummies have been found at the world’s highest-altitude archaeological site. There’s nothing quite like unending cold to keep an ancient corpse looking fresh and young. Three young people, two girls and a boy, have been uncovered atop Argentina’s Mount Llullaillaco at a height of 6,706 meters, buried under one and a half meters of loose and dry earth. They were ritually killed over 500 years ago in what appeared to be an Inca sacrifice to the deities of the mountain.

The children have been luckier in death than they were in life. “The arms look perfect, even down to the visible hairs,” commented Johan Reinhard, the co-leader of the American-Argentine-Peruvian expedition. CT scans conducted within a few days of the expedition show that all the internal organs are intact, and it appears that frozen blood may still be extant in the aorta of one of the children. This unique situation could open unparalleled opportunities for research.

Mt. Llullailaco (pronounced yul-yai-yaco) is one of the world’s highest volcanoes and work at the ruins near the top is fraught with hardship. The team was forced to brave continuous 110 k/h winds and extreme cold. The wind had a plus side – it kept snow off the site. The team spent several days looking, and finding nothing was about to give up before discovering an earth-filled hole that tipped them off to the location of the first mummy. 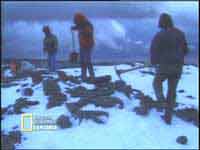 But hard work at high altitudes can lead to altitude sickness. One of the team members came close to death when he came down with pulmonary edema, a complication associated with altitude sickness. The stormy weather that’s common atop the mountain may have been responsible for the lightning damage on the left side of one of the female mummies.

The grave was untouched by looters who had been in evidence at some other Andean burial sites the Reinhard had visited, such as Quehuar. There, would-be looters used dynamite to try to steal valuable artifacts. At Llullaillaco the burial platform was uncovered much as it must have been left after the burial. Elaborate offerings to the gods were found – 35 gold, silver and spondylus shell statues, bales of elaborately woven cloth, and fine Inca ceramic work, some of which still contained food. A yellow geometrically designed blanket covered the undamaged female, and a white feathered headdress lay on her head.