We think of ice caps on our planet as “normal,” because in the recent past there has always been polar ice in both the Arctic and Antarctic regions. However, if we look at all of Earth history we find that there are also extended periods in which there were no polar ice caps. The growth and retreat of glaciers occurs in response to changes in global climate. There have been many periods of Earth history in which large parts of the planet were covered by glacial ice.

Glaciers, whether large or small, leave abundant evidence of their presence, even after they have melted and the ice has disappeared from the landscape. At various places around the world we can see glacial features that have been preserved for hundreds of millions of years.

In New York state we don’t have to look so far back in time to find evidence of a glacial period. The Earth’s climate has been growing gradually cooler for the last 50 million years. About 15 million years ago this cooling accelerated, causing large ice sheets to expand and cover the Antarctic continent. Two million years ago ice sheets were present in the northern hemisphere as well. 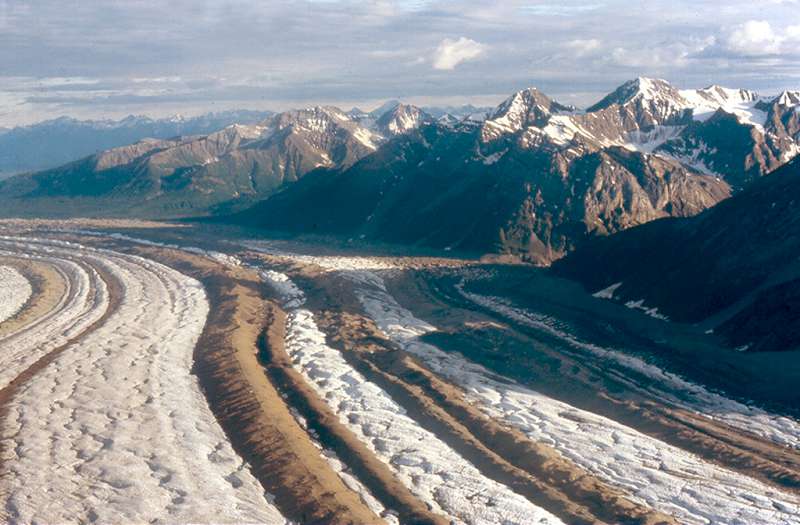 Glaciers in the Wrangell Mountains of Alaska

On the North American continent we recognize four distinct periods of glaciation that occurred within the last 1.6 million years. The most recent glacial event ended 10,000 years ago. This period of time, from 1.6 Ma to 10 ka is called the Pleistocene Epoch. The last of the four glaciations is called the Wisconsinan, and the remains of this glacial advance are prominently displayed in central New York.

Ice sheets or ice caps are large accumulations of ice that flow laterally under their own weight. A continental ice sheet forms at high latitudes when the winter accumulation of snow does not completely melt in the summertime. More snow is added in subsequent years, and the weight of snow pressing down on the layers underneath turns the older snow to glacial ice (those of us who have to shovel our driveways in the winter know how heavy snow is!). The weight of the snow and ice is also what causes the ice sheet to flow laterally.

As the weight of accumulating snow and ice press down, the ice is forced to flow horizontally. In map view, the ice flows radially away from the center of the ice cap. Because the ice cap is so heavy, it weighs down on the continent on which it sits, pushing the continental lithosphere down into the mantle below.

The motion of ice creates very characteristic landforms, both during the advance of the glacier and during its retreat. While Greenland and Antarctica are presently covered with ice sheets, we can study glacial landforms by visiting the more accessible mountain glaciers in places like the Alps, or Rocky Mountains.

The Gorner glacier in Switzerland, with the Matterhorn in the background.

As glaciers advance the ice scours the underlying bedrock. Pieces of rock become embedded in the ice. Additionally, erosion of the surrounding terrain also adds rock to the surface of the glacier. In the photograph above rocks traveling on the glacier surface are clearly visible as linear piles of debris. These are moraines. Note that there are both lateral (along the sides of the glacier) and medial moraines (in the center). At the “toe” of the glacier where the ice melts, there will also be a terminal moraine. The upper part of the glacier is called the “zone of accumulation,” where there is frequent snowfall and little melting, even in the summer. This is the “weight” that drives the glacier forward.

The toe of the glacier is known as the “zone of ablation.” Here the ice melts, debris is deposited, and rivers derived from glacial meltwater are formed. The glacier is always in a state of balance, or dynamic equilibrium. If there is more accumulation than ablation, the glacier will advance. If there is more ablation than accumulation, the glacier will recede. If the two are exactly balanced, then the glacier will remain stationary (but the ice still moves!) Think of it as a large conveyor belt, continually moving ice and rocks toward the toe of the glacier. The Gorner glacier is clearly receding, as the “bathtub ring” on the valley walls shows. This glacier has lost much of the ice that was previously present. 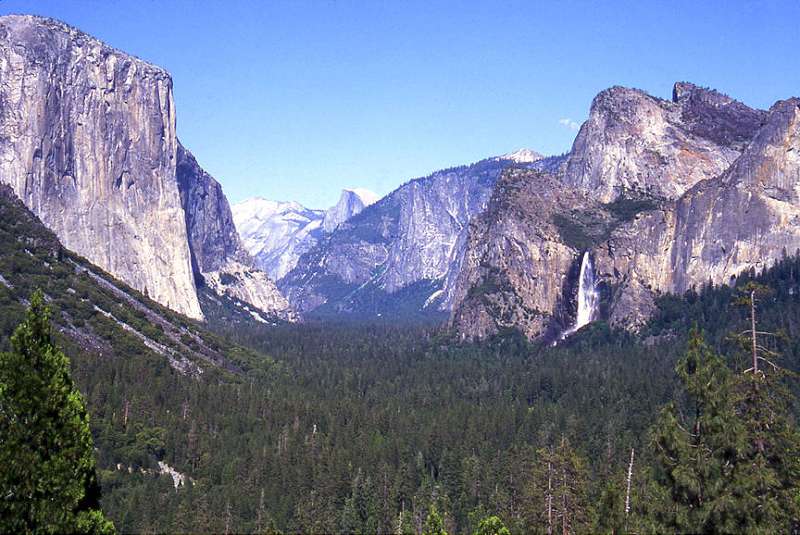 Yosemite Valley, California. The cliff on the left is El Capitan, the peak in the background (center) is Half Dome, and on the right is Bridal Veil Falls

When a glacier has completely melted away, how can we tell that it once existed? Glaciers leave abundant clues. Among them, the presence of debris from lateral, medial or terminal moraines is a good indicator of the existence of a glacier. Glaciers also carve very distinctively-shaped valleys. While modern rivers typically occupy valleys with sloping, “V-shaped” sides, glaciers carve broad “U-shaped” valleys. This is spectacularly displayed in Yosemite National Park (above) where the vertical sides and flat floor of Yosemite Valley are clear evidence of the presence of a former glacier.

In fact, Bridalveil Falls tells us exactly how much ice used to fill the valley. Modern Bridalveil Creek is all that is left of a tributary glacier to the main Yosemite Valley glacier. This former tributary entered the valley above the top of Bridalveil Falls. The ice melted away more quickly than the creek could erode through the granite bedrock, leaving behind a “hanging valley,” as yet another piece of evidence of the former glacier.

Moraines are not the only debris left by retreating glaciers. Boulders can be carried many miles by advancing glacial ice. When the ice melts, rocks of “exotic” lithology may be left behind. A glacially derived rock whose composition differs from that of the underlying bedrock is known as an erratic. Some erratics can be enormous–a sign of their glacial origin. The Madison Boulder in New Hampshire is far too large to have been transported by running water!