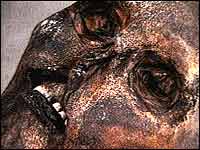 A long and bitter custody dispute over the remains of a prehistoric European is finally over.

The body of Oetzi, as the iceman is now called, arrived at his permanent home in Bolzano, Italy on Friday.

It’s been a long trip. He spent the last 5,300 years frozen into a glacier atop the Alps and then the last six years embroiled in a diplomatic squabble between Italy and Austria.

The dispute over who has legal battle began almost as soon as the body was discovered.

A pair of German tourists stumbled across the remarkably well preserved remains sticking out of a sheet of ice on September 19, 1991 while trekking through the Oetzal Alps right on the border of Austria and Italy. Fearing the body was only recently dead, the couple called the Austrian police.

After five days chipping the body out of the ice and checking for any signs of foul play, forensic experts declared the body was of prehistoric origins and handed the now slightly damaged corpse over to the Austrian Department of Anatomy at Innsbruck. 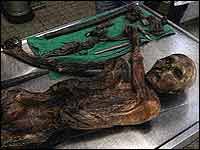 Because it was so perfectly preserved, the body was initially assumed to be only about 500 years old, possibly that of a soldier who fought under Austria’s Duke Ferdinand.

But when radioactive dating confirmed the corpse was roughly 5,300 years old, Italy laid their claim on the body, saying it was found on the Italian side of the border. The Austrians disagreed saying the body was found on Austrian ground.

The argument was finally settled last month when surveyors ruled the body was discovered inside Italy…but not by much. Another 11 metres to the north and the remains would have been in Austria.

Oetzi’s body will be on display at the new Museum of Archeology in Bolzano beginning March 28. His specially designed display case will keep his body at precisely -6ºC in 100% humidity.

He will also be under the authority of an international commission including both Italian and Austrian archeologists. They will decide what researchers can now see the body. 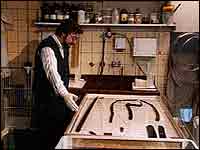 This may not be the end the battle over Oetzi. Many extreme Austrian nationalist groups still claim the body as theirs and have threatened bomb attacks in retaliation.

Not all the interest around Oetzi has been violent. Last summer, Irish anthropologist Tom Varley decided to try to bring the ancient man back to life by taking up his final days, dressed as Oetzi was, carrying the same tools, eating the same food. His diary is posted on the Internet.

No one is sure what killed the prehistoric man. He died apparently from exhaustion, but still quite healthy at the age of 45. He suffered from arthritis, had a few broken bones and had slightly blackened lungs, probably as a result of living around open fires.