Maerten van Heemskerck is one of the most important represen- tatives of the Dutch Romanism. Born in 1498 at Heemskerk, he went to Haarlem to become a scholar of Cornelis Willemsz. When Jan van Scorel came back from his stay in Italy and opened a workshop at Haarlem, van Heemskerck was his scholar from 1527 to 1529, which formed his early workes. Van Scorel opened a workshop in Utrecht in 1529 and Van Heemskerck opened his own in Haarlem.

In 1532 van Heemskeck went to Italy. Just before leaving he made the famous painting Saint Luke painting the Madon- na for the Haarlems paintersguild. In Rome he made a lot of skitches and drawings of the works of Michelangelo and other Renaissance artists, but he studied also the Roman antiquities. These skitches were an enormous help to archaeo- logists to reconstruct ancient Rome.

When van Heemskerck excactly returned to Haarlem is unkwown, but he in 1538 he signed a contract for a big altarpiece in the Saint Laurenschurch in Alkmaar.

After his first wife had died very young, van Heemskerck got married with Marytgen Gerritsdochter with whome he founded a trustfond for poor young girls without a bridaltreasure. 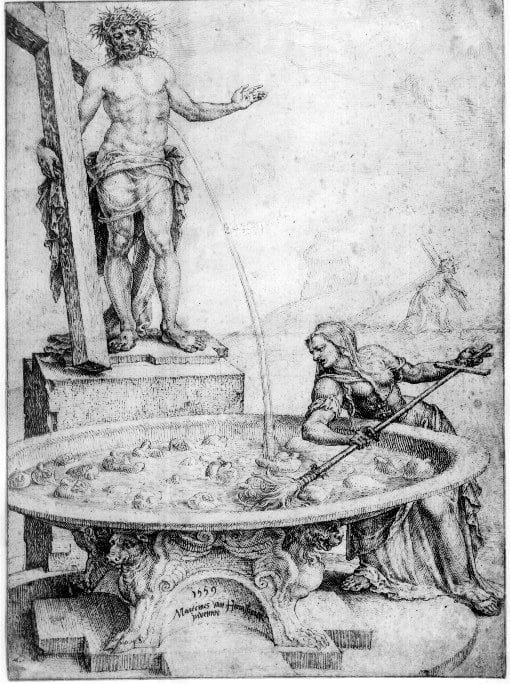 Van Heemskerck was an important man in Haarlem, he became churchmaster of the Saint Bavochurch in 1553, in 1570 the towngovernment spoke him free of paying taxes because of his outstanding work and van Heemskerck was choosen chairman of the guild more than once.

Van Heemskerck left Haarlem in 1572 when the Spanish armies tried to conquer the city. He fled to Amsterdam to live with a former scholar Jacob Rauwaert, and came back only in 1573. A year later he died there.