Detail and Annotation of Symbology 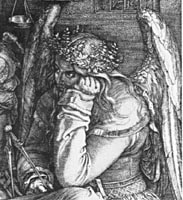 The winged feminine figure in Durer’s Melencolia I is generally accepted as being the embodiment of Human Reason, with perhaps no little connection with the Greek goddess Athene. Reason’s face is in shadow, except for her eyes, which are fixed forward, not on the page she is inscribing. This it to represent the impotency of the human intellect, even in the throes of burning inspiration. Reason is thwarted, blocked; she cannot tap into the inner light regardless of the tools and implements around her. 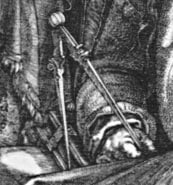 The compass, like other tools we see around the figure of Reason, is both an example of the Art of Geometry (one of the seven parts of the traditional Renaissance education), and also an example of Humanity’s attempt to structure, reproduce and measure the physical world. This compass hangs loosely in Reason’s hand, rendering its function useless.

In this detail, the symbology is completely reversed from the usual iconography. The bat in this instance does not signify death or evil, a rare occurance in Mediaeval and Renaissance art. Rather, it merely serves as a winged messanger for the title of the piece, and to bring home the theme of melancholy, one of the four “humors” of early medicine. Melancholy, or the preponderance of “dark” or “black” bile in an individual’s make-up, was associated especially with darkness, intensity, and driven genius. Thus, the bat, which appears only in darkness, symbolizes the melancholy nature of those whose lives are ruled by reason.

Similarly, the comet is usually taken as a bad omen or a warning of calamity. In this engraving, the comet serves as the sole light source for the scene, and its rays are refracted in the night sky into a glittering rainbow-shaded halo. The comet, then, stands for the light of human reason, and also as a symbol of the Art of Astronomy, a second traditional subject.

This image links the paradigm of the four humors to the paradigm of astrology. Durer was very much a believer in astrology, and had his birth horoscope cast several times for insight into his character. The hourglass is an ancient symbol for Saturn, or Kronos, who appeared to the Romans as “Father Time.” In astronomical terms, Saturn is visible planet that moves slowest in the night sky; its slow progression is easily transmuted into the depressive nature of those suffering from “too much melancholy”.

Another symbol of human reason, the strange diagram etched in the wall above the seated figure is a so-called “magic square”. Each straight line in the square, and both diagonals, add to the sum of 34. It is speculated that the number holds further astrological meaning, or that it signifies Durer’s age at the time (which, was actually 33, if the date “1514” is correct). It is most definitely a symbol of the Art of Mathematics, another tool by which man measures the world around him. 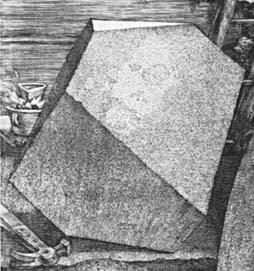 There are four objects in this particular section with interesting meaning. The hammer, like the saw and nails below Reason’s dress, symbolizes Architecture, as does the ladder in the background. However, the hammer and nails lie in disarray, and the ladder leads to nowhere, showing again the stymied nature of human Reason and the inability for these tools to reach a higher level of understanding.

The lack of inspiration for which Reason feels so strongly is reflected in the other two objects. The blank of marble, itself a geometrical form, has not yet been touched. The crucible, seen behind and to the left of the blank, burns unattended. Neither resource is being used to its full potential; it could be said that the light of the comet does not cast enough light to work by. The crucible also subtly contains another interweaving of themes, in that it probably contains a casting of lead, the element most closely associated with the planet Saturn.