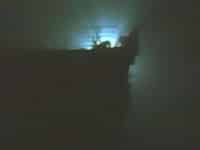 It’s the kind of story you hear around a campfire from a storyteller speaking in a hushed tone: the Mummy whose curse killed archeologists and egyptologists indiscriminately before taking the ill-fated passengers of the RMS Titanic to their watery graves! Perhaps even punctuated by ominous moans or a bone-chattering cackle or two, a story like this can leave even the most fortified grown-ups look over their shoulders when they turn out the lights for the night.
But is it true?

According to Carol Andrews, assistant keeper at the British Museum’s Department of Egyptian Antiquities, it is! Sort of.

“[It’s not a mummy.] It’s not a coffin. It’s not even a coffin lid, but a sort of mummy board that just lay over the top of the wrapped body,” she says.

“It’s supposed to have caused so many problems, striking members of staff down with disease if not death, that it was sold to an American who decided to ship it home and use the largest liner in the world, which happened to be on its maiden voyage. And we all know what happened to the Titanic.

“But this haunted mummy – or rather coffin lid – was supposed to have been saved — I’d love to know which lifeboat it was on — And it got to America where it continued to wreck havoc. So the American sold it to a Canadian, who took it back to Canada where it continued to wreck havoc. So the Canadian put it on a ship to send it back to England and he put it on the Empress of Ireland. And I’m sure you know the Empress of Ireland was involved in a three-ship collision in the mouth off the St. Lawrence with greater loss of life than the Titanic and that’s where the mummy board should be.”

Thankfully for this valuable Egyptian artifact, it did not sink to the bottom of the river with the rest of the ship. In fact, Andrews says, it eventually did make its way back to the British Museum.

“It’s only left the museum once [since then]. In 1990 we were rather foolish enough to loan it to Australia for an exhibition. And I’m sorry to say that when it was flown out, I was the person with the plane with it. I don’t believe in these things, of course, but I was a lot happier when we landed on the ground in one piece in Australia.”

A pretty remarkable journey for an ancient Egyptian antiquity!