I am interested in, first, signing up when you offer subscriptions, and second, finding out about the confusing marketing hype over such nutritional supplement as METrx, Chromium Picolinate, Creatine, Thermogenics”, L-Glutamine, Whey vs. Egg protein (which is better for the body?), etc.

I ask this because I work out 5-6 times a week, using a combo of both weights and aerobics, with workouts usually lasting 1.5 hrs.

I also work at 2 jobs, hence I try to keep my energy at optimal levels by not eating junk and sticking to good foods.

Just in case my busy schedule doesn’t allow it, however, I do take a timed-release mega-potency multivitamin and a protein drink (or two) daily. This is why I’m interested in finding out about all the above nutritional supplement. (I also am 5’6″, 150 lbs and if I don’t watch it, can gain the chub easily).

Confused ? Well rest assured, you’re not the only one! Judging from the amount of e-mail we get on the subject of nutritional supplement, this is one of the major sources of confusion in the ‘health conscious’ public. It’s not really suprising since the nutritional supplement industry is a billion dollar industry and therefore fueled by massively powerful advertising . Gaining confidence of people by telling them what they want to hear, a very powerful tool 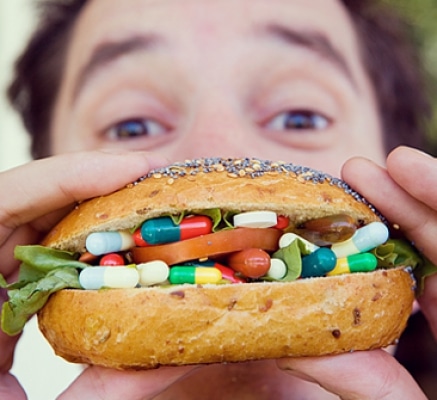 In order to give the maximum attention to each individual query, what I would like to do is to take one at a time per month and try to separate the facts from the hyperbole ie:

As regards 2 & 3 you should bear in mind that all information stated will have been gained from readily available ,creditable, scientific sources and so may not agree with the ‘studies’ (usually only carried out on about a dozen people and therefore hardly representative). So , with this in mind and in no particular order, lets look at the first supplement.

It is a form of chromium which has been chelated. I will explain the chelation process in a further article but in brief it means that it has been mixed with a carrier (in this case picolinic acid) and pre-digested so that it is more readily absorbed by the body. So put simply, chromium picolinate is an efficient method of putting more chromium into the body.

So what does chromium do in my body? Why do I need it ?

To make your insides bright and shiny ! No, not really !

Chromium is a trace element. Generally there is about 2mg in the body and the average daily intake is about 0.15mg, being found in many different foods. Knowledge of the exact roles and dietary requirements for trace elements is incomplete for three main reasons

As you can surely appreciate, the ‘scientific unknown’ is an ideal breeding ground for clever marketeers to exploit since there are few facts to disprove their claims!

What is known about chromium is the following: It is found fairly widespread in foods. It is used in the body for efficient transportation of proteins. It works with insulin in the metabolism (turning to energy) of sugar.

Armed with this information a clever marketing ploy could be that this is just what you need to build muscles, this is based on the theory that if a little’s good, then a lot must be better ! Well, they could be right! but …

Chromium is a trace element. (Remember 2 mg is all that’s in the body) I don’t know how much chromium is in the chromium picolinate tablets, but a typical nutritional supplement pill size is about 200 mcg, some 200 times more than is usually required. Even if there is room for your body to store it, don’t you think it’s akin to fitting a 1000 gallon fuel tank to your car just in case you run out of fuel?

I hope this is of use to you, I will tackle another supplement subject next month.

1 thought on “Nutritional Supplement – Chromium – Which is better for the body?”