A recurrent question about orchids is, “Can I grow orchids in my home or do I need a green house?” Fully two-thirds of the members of the National Capital Orchid Society grow in their homes, so the answer has to be, “Yes, you can.”

The most popular orchid, and the one which most beginners start with, is the Phalaenopsis. The Phal, as it is normally called, grows in African Violet conditions. It wants an hour or two of morning or late afternoon sun directly on the leaves, usually likes to be 65 degrees or warmer, and needs to be kept evenly moist–normally a couple of waterings a week. In return, a Phal will provide you with 6 to 10 weeks of bloom from a spike, carrying up to 10 or more large four-inch flowers, plus a reblooming or two if the plant is large. A robust specimen, the Phal can have flowers for half of the year. Like most orchids, Phal plants live for far more than a hundred years if given good care, growing one or more showy spikes each Fall. Because of the wide popularity of Phals, there are many hybridizers working to make them even more spectacular. Every year thousands of new crosses are made. The Phal is certainly the first choice for homes without many sunny windows or for light growers.

Since there are hundreds of orchid genera and as many as 30,000 orchids that grow in many other conditions too. The Cattleya hybrids have the flowers most of us remember in corsages. In contrast to the Phal, the Cattleya needs lots of sun, it wants a minimum of four to five hours of sun on the leaves. It also likes to have its potting media dry out before watering. If you have at least half a day of sun where you could grow a Cattleya, there are few more impressive sights than a spray of several six or seven inch Cattleyas! 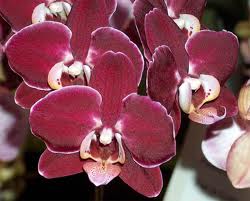 Between the hour or so of sun needed by the Phal and the five hours of sun needed by the Cattleyas there are two other types of orchids people often begin growing orchids with. One is the Oncidium alliance hybrids, sometimes called the `dancing ladies’ because of their bright yellow lips. Oncidium alliance hybrids also come in purple, white and other shades and can have exotic patterns and shapes. The ever popular Miltoniopsis, known as the “Pansey Orchid,” is also in the Oncidium alliance. For home growing, these need three hours of sun on the leaves and like to partly dry out before watering.

How to grow orchids at home

Dendrobiums grow in the same conditions. Dendrobs can bloom more than once a year and have long-lasting spikes of three-inch purple or white flower from the top of their tall, narrow canes. With over 1500 species, the Dendrobs are one of the larger orchid genera. In addition to the widely grown Dendrobs, Phalaemopsis there are hundreds of other types ranging from large five foot plants to miniatures only two inches high.

The final group of orchids widely grown in the home is the Paphiopediliums, or Paphs, sometimes called the Lady Slipper orchids because their pouches resemble the toes of a lady’s slipper. These want two to three hours of sun on the leaves and moist media, but they are adaptable to cooler temperatures–even down to 50 degrees or so. Next Phals, Paphs are the easiest orchid to grow in the home. Also like Phals, they grow superbly under lights.