In 1990, astronomer Sandra Faber diagnosed — and later helped correct — a major flaw in the Hubble Space Telescope. We talk with her about her current work on how galaxies form and evolve.

Sandra Faber is an astronomer at the University of California’s Lick Observatory. She’s renowned for her studies of how galaxies form and evolve.

In 1994, Faber and her colleagues began to build an enormous optical instrument called the DEIMOS spectrograph. It separates a galaxy’s light into different colors — or wavelengths. The separation helps show what the galaxy is made of, how fast it’s moving toward or away from us, and how massive it is. Faber and her team are now using DEIMOS and other instruments to make a survey of 65,000 extremely distant galaxies.

Sandra Faber: Big telescopes look out into space but also back in time. And our survey is viewing galaxies as they actually were in the universe billions of years ago — more than half the way back to the Big Bang. So we are seeing infant and adolescent galaxies. And the goal is to compare them to our local galaxies to find out how galaxies formed and evolved.

Faber expects the survey to take another three or four years.

Sandra Faber: I think we all have a craving to put ourselves in perspective. And what astronomy is doing is, it’s providing the modern cosmology myth. …. So what we’re doing … is writing the early history of the human race — our cosmic roots.

Sandra Faber is one of the most distinguished astronomers of our times. She is one of an elite group of scientists that are members of both the National Academy of Sciences as well as the American Academy of Arts and Sciences. In 1985, she was awarded the American Astronomical Society’s prestigious Dannie Heineman prize in recognition of a sustained body of especially influential research.

Early in her research career Faber discovered a relationship between the brightness of elliptical galaxies and the speeds of stars orbiting within them, now called the Faber-Jackson relationship. Important concepts such as “cold dark matter” and the “Great Attractor” theory are direct results of work by Faber and her colleagues. In 1990 she diagnosed and helped correct the flaw in the optics of the Hubble Space Telescope (HST) and is currently a member of the HST’s wide field planetary camera team.

For nearly two decades, she helped plan and develop the twin Keck telescopes atop the dormant Mauna Kea volcano in Hawaii. Faber was instrumental in the construction and oversaw the optical design of the Kecks. 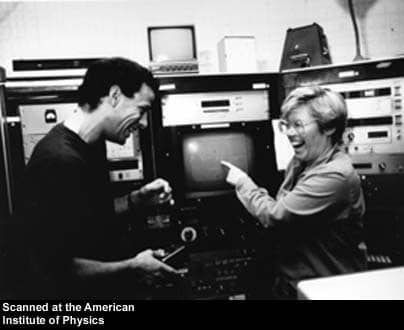 In 1994, she and her team at University of California’s Lick Observatory began to build an enormous optical instrument. The instrument, called the DEIMOS spectrograph, was designed to fit on one of the world’s largest telescopes, the Keck 2, atop a dormant volcano in Hawaii. Like a prism, a spectrograph works by separating light into component wavelengths. The spectrograph Faber’s team envisioned was unprecedented in size and scope. It would allow them to collect information about distance and movement from thousands of extremely faint galaxies, giving clues to the evolution and large-scale structure of the Universe. At 20,000 lbs., the instrument was calculated to increase the efficiency of the telescope by seven-fold. But no one had ever attempted to build a spectrograph of that size.

Sandra Faber:  “We were afraid when we built our spectrograph that it would flex. As you build bigger telescopes the steel and the glass bend under gravity. And it’s been known for a long time that you have to have corrective elements in the optical train to keep everything aligned. And our spectrograph was going on a very big telescope and was very massive and large. And we suspected that it would flex, and were clever enough actually to build in an insurance policy … Thank god we did that (laughs).”

The team built an active steering element into the spectrograph, allowing it to sense and track the telescope’s image. Without this compensation system, the images would have been useless. Instead, the DEIMOS spectrograph can gather spectra from 140 galaxies every night, the equivalent of several hundred nights of observation with less sophisticated instruments.

Sandra Faber: “Right, there’s an old Chinese proverb that a picture is worth a thousand words, but to an astronomer, a spectrum is worth a thousand words. From a spectrum of a galaxy, we can measure how fast it’s moving away from us, which because of the expansion of the universe tells us how far away it is; we can tell … what it is made of, what chemical elements it has in it, in the gas and the stars. And we can also even tell how fast it’s rotating and weigh it and get its mass.”

Faber on astronomy: “It’s kind of a delightful science — you really don’t have to educate people, most people, as to why what you’re doing is important. It seems like it’s an automatic human need to know more about the universe. And I think it is an automatic human need. I think we all have a craving to put ourselves in perspective. And what astronomy is doing is, it’s providing the modern cosmology myth. It’s writing our history the way Genesis tried to write it, except it’s doing it with modern scientific information. And the wonder of it is that the real story, to me anyway, is much more awesome and grand than anything that humans could have thought up on their own. It took data from the universe to tell us about ourselves. So what we’re doing, what astronomers are doing is writing the early history of the human race, our cosmic roots. Which biologists can add to by telling us where life came from and historians can add to by telling us, and anthropologists by telling us how our species came into being and what it’s been doing. But it’s all one grand uninterrupted picture or river of time. Which all fits together. It’s very beautiful, it’s factual, but at the same time it’s deeply spiritual.”

Faber on conservation: “So why do we need this information? The reason we need it, as a species, we need to figure out where we’re going; we need to figure out what our possibilities are. Our possibilities are truly mind-boggling. But it’s the astronomers who carry this information. What is this information? It’s the fact that the sun has at least another billion years to live, possibly more, before we need to look elsewhere. We have this wonderful gift of time. If you chart out our origin, the human race, intelligent life, on our planet came into being lickety-split. There were several steps involved, but every step went as fast as it possibly could. And I don’t know whether this was luck or design, but the net result is we got here while our sun still has a lot of time left, so the Universe has given us this precious gift of time. And it just kills me as an astronomer to think that it took 14 billion years for our species to get here, which is an incredible investment on the part of the universe, and that we might fritter it all away in a couple of centuries, just by misusing our precious planet. If we could somehow solve our environmental problems and position ourselves for the long term, we’ve got a billion years here in which we can develop and do fantastic things, making, I think, what we’ve done so far seem completely insignificant. This is a great message and it comes from astronomy.”

Although perhaps a third of physical science graduate students in American universities are women, far fewer than a third go on to faculty positions at major research institutions. Researchers have concluded that the root of the problem is not any one distraction, but rather “death by a thousand little things”. Women may just have more career/life choices than men.

Faber on women in research careers:  “You really, to persist in research requires a great faith in what you are doing and it’s importance, and an almost single-minded blinkered focus year after year on that, and it’s very hard to do that in the face of a lot of distractions, especially family distractions. So a lot of women may persist in research, but they may not be able to pursue it with quite the same vigor. And that, it’s kind of like interest, you know, if you can save when you’re young, the few dollars that you put away when you’re young make a huge difference later? It’s like compound interest. The extra hours that you invest in your research career when you are young, at the very age when women are distracted by children and child care responsibilities. Those, those hours reap huge awards — rewards, for you later. And if you can’t make that investment, you are penalized.”

Faber had her first child barely a year into her first job out of graduate school, an assistant professorship at UCSC’s Lick Observatory. Although she continued to teach, she didn’t produce a scientific publication for three years, a hiatus that might kill a promising scientific career today.