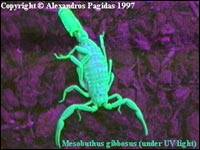 Scientists have described them as one of the ‘nastiest and most durable hunting and killing machines ever produced by natural selection.’ Scorpions have been hunting, stinging and killing their victims for over 420 million years – long before dinosaurs roamed the Earth. Scorpions may be best described as tiny lobsters that carry their curved tails above their elongated bodies. And the segmented tail could be best described as a lethal weapon because of its venom-tipped stinger that lies in wait of its next victim. 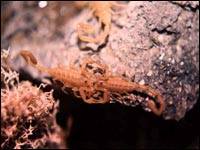 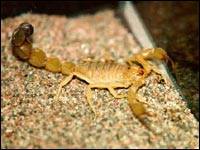 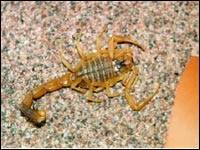 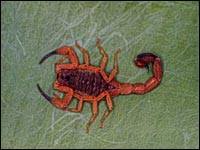 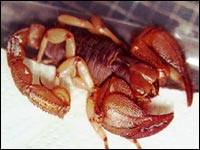 Species like the South African Scorpion (Hadogenes troglodytes) have been known to reach lengths of over 20 centimetres. And some of the largest scorpions in the U.S., giant desert hairy scorpions can grow to about eight centimetres. On the flipside, a species that may look less threatening in appearance is the Vaejovis waueri species that only grows to about 23 millimeters in length.

Scorpions are venomous arthropods of the arachnida class and are considered to be relatives of spiders, mites and ticks. So far scientists have discovered more than 1,500 different species of scorpions – all of which are poisonous to some degree. And they also believe that as many as 1,000 new species are yet to be discovered. More than 80 scorpion species can be found in the U.S. – with almost half of these residing in Arizona. Some of the scorpions that scientists regard as deadly creatures are listed below.

Where to find scorpions

In scorpion counties like New Mexico and Arizona you may find them hidden in your shoes, between bed linens and under carpets if they happen to wander into your home. Scorpions have been found hiding under snow-capped rocks in the Andes Mountains as well as the Himalayas. Most of the species in the U.S. can be found west of the Mississippi River, in deserts, savannahs, caves, grasslands and deciduous forests.

Scorpions appear as little green monsters when placed under longwave ultraviolet light. Scientists have not yet discovered the reason behind their flourescence. (Photo courtesy of the Singapore Scorpion Page – Alexandros Pagidas)

Scorpions hunt by night and prey on a variety of insects, spiders, centipedes and other scorpions by using their lobster-like claws (pedipalps), venom and sensory hairs to sense the vibrations of a potential meal. Some of the larger scorpions occasionally feed on vertebrates like small lizards, snakes and mice. When attacking, a scorpion will seize its prey with its claws, using its venom only if the victim resists capture.

In humans, the scorpion’s venom may cause symptoms like swelling at the site of the sting, numbness, convulsions, frothing at the mouth and difficulty breathing. With the exception of young children and the elderly, humans are most likely to die from a scorpion bite only it they do not receive medical attention (possibly including an injection of anti-venom). Areas like North Africa, Mexico, India and the Middle East have higher incidents of deaths related to scorpion stings than the U.S. In Mexico, as many as 1,000 people (mostly small children and the elderly) die from scorpion bites each year, mainly because they are unable quickly access medical facilities.

Most scorpions have a total life span of two to six years, depending on factors like temperature, food availability, stress, etc. The longest reported life span for a scorpion is eight years.

Stinkbugs - the smell is a form of defense
The biggest meteor known to collide with Earth?
Sunflower helps trace the history of human civilization
0 replies