As you contemplate the ruins of last summer’s garden and ponder miracles for next year, give sunny, black-eyed Susans a chance to work some for you. This rustic native plant is the cover story of the summer 1996 issue of The Quarterly Journal of The Perennial Plant Association, and that’s a considerable endorsement.

The Quarterly is a small magazine published for nurserymen, wholesalers, and other members of the Perennial Plant Association. It’s not exactly the Vogue or Harper’s of the gardening world since its only color picture is on the cover. The editors deal with subjects of particular interest to their membership, and they’re the people who decide what our garden centers will be selling in the years ahead. Since you and I buy what’s available — trust me, we’re going to be growing rudbeckia. And we’re going to love it!

Only the naive still think of black-eyed Susans as field flowers. I was a member of the group when we first moved into this house. After the party-pretty pink flowers of our weeping cherry tree had gone by, I was not enchanted to see this big swath of large, coarse, dark green leaves fill out under the tree. When by mid or late June a few brash yellow daisies with sooty black centers came into bloom it was like the moonlight sonata being followed by hard rock.

The rudbeckia were allowed to remain that year only because I have learned the hard way that digging up a garden at a new house before you’ve seen it through a 12-month cycle is a mistake only the very rich can afford. They were still in place three years later only because they performed so well that ripping them out never became a priority. It was the famous landscape design duo, Jim van Sweden and Wolfgang Oehme, who taught me their real value.

Jim and Wolfgang are the chief architects of America’s love affair with the naturalistic New American Garden and its grassy prairie-meadow look. They helped me compile the ornamental grasses lists for National Arboretum Book of Outstanding Garden Plants, and later for the American Horticultural Society Flower Finder. The grasses are grouped according to specific uses — for shade, for wet places, etc — and each list is accompanied by a group of “companion plantings. Rudbeckia fulgida var. sullivantii ‘Goldsturm’ was mentioned so often I had to stop snubbing my plants..

When I am going to write about a subject, I usually try to visualize it. So I began to “see” black-eyed Susans with the other companion plants they were recommending — lily flowered tulips, jade green Sedum spectabile ‘Autumn Joy,’ fern-leaved yarrow Achillea filipendula ‘Coronation Gold’, purple coneflower Echinacea purpurea, Liriope platyphylla ‘Majestic’, and soaring sky-blue Russian sage, Perovskia atriplicifolia. 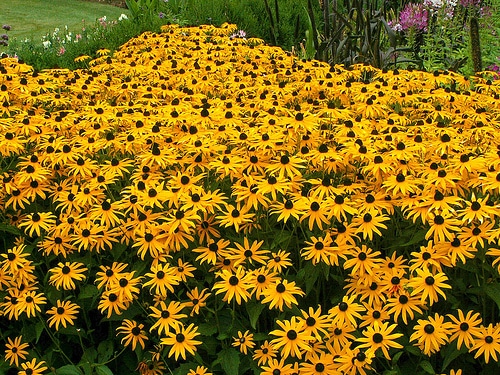 The tulips die back, of course, but I “saw” that the others provide three and even four months of continuous color and that the strong gold of the coneflower disc with its dramatic black eyed is very good. And as I learned later, when you let plant groups like this go to seed in the garden, their dessicated structures provide food for birds, and have a wonderful wild, cosy look when fallen leaves drift up around them, and snow comes.

Our rudbeckias, which I now think of by the tonier name of coneflower, are still thick and beautiful in spite of the fact that the tree has grown and leafed out so that they get less and less sun. The colony has moved out toward the brighter light on the edge of the drop line of the cherry tree. They bloom in mid to late June and one or two small blooms still shine now in mid October as the leaves come tumbling down. Weeds don’t have a chance in the shade of their dense dark foliage.

I’ve never had to water them. A tree expert we engaged to check out the symptoms of fire blight in our cherry tree said the rudbeckias were OK there. However, he recommended I remove the impatiens I had started to grow behind the rudbeckias. He said the water and fertilizer most flowers need in August can encourage diseases in trees that aren’t used to being pampered that time of year. One more plus for rudbeckias.

Our plants probably are ‘Goldsturm.’ A four-year study reported in that issue of the PPA Quarterly suggests it’s the best one for gardens. A rhizomatous species that spreads slowly, it gets to be 18 to 30 inches tall. It’s the showiest, the earliest to bloom, and has the longest period of flowering.

For the garden with a somewhat damp situation, ‘Goldquelle’ would be a good choice. It’s a beautiful cultivar of R. lacianata the wild coneflower that blooms at the edge of moist woodlands from Quebec to Florida,

For a large gardens, and for the back of the border, R. nitida ‘Herbstonne’ (‘Autumn Sun’) is probably the best choice. It develops very dense four- to five-foot clumps with upright, branching stalks and blooms non-stop throughout July and August even in high heat that shuts most other flowers down. The flowers are big, showy heads of drooping clear yellow ray florets surrounding a central greenish disk. They are likely to need support as storms may knock the plants over, especially in the South. It is somewhat less hardy than the other species but it is one of the finest coneflowers.

For a flowering field, or a wild flower garden , choose the aggressively spreading self-sowing annual/biennial R. hirta . The flower is smaller than the cultivars mentioned above, but very similar, and it can stand a lot of heat and drought. R. triloba is recommended for damp meadows. Plant Boltonia with it, and Queen Anne’s lace, and let thistles come in if they’re in the right place.

Seeds, of various rudbeckia species and cultivars are available in at garden centers and from mail order catalogs now. Come spring you’ll find seedlings and root divisions are garden centers. If you are looking for the wild varieties, try catalogs specializing in native plants. They’re are more and more rudbeckias getting ready to bring small miracles to your garden this coming year.