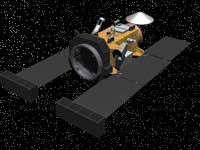 Imagine sticking your head out a car window while driving slowly through a snowstorm. It’s a lovely, peaceful image, isn’t it? Now imagine the snowflakes are tiny, hard and incredibly sharp and that your car is traveling not just a few kilometres an hour but at several hundred kilometres an hour.

As unpleasant as this sounds, it is exactly what the Stardust spacecraft has to look forward to when it passes through the tail of Comet Wild 2.

Its mission is simple: study and recover tiny particles ejected from the comet’s nucleus. In a little less than seven years, this small satellite will circle the Sun three times (once using the Earth’s own gravity to propel it even faster towards its target), rendezvous with the comet, and return to Earth to drop its sample safely into an army base in Utah.

Studded with antennas, cameras, sensors and sampling equipment, Stardust is a deceptively simple device. Built under NASA’s Discovery program — which also includes the Mars Pathfinder Lander, the Near Earth Asteroid Rendezvous and the Lunar Prospector orbiter — it was designed to be cheap but effective.

Compared to many other NASA deep space missions, Stardust is comparatively simple. There are only two dedicated science missions.

Sticking out of the underside of the craft is the Cometary and Interstellar Dust Analyzer, a large, gold-coloured instrument that will collect samples of dust that have been blown off the surface of the comet. It’s virtually the same instrument that traveled aboard the Giotto and Vega 1 and 2 spacecraft when they encountered the tail of Comet Halley in 1986.

This instrument is a mass spectrometer. It takes ions — tiny particles that have been stripped of all their electrons by a powerful electronic grid — and measures how long it takes them to make it to a receptor at the end of a sharp turn at the base of the unit. The heavier an ion is, the more time it takes to make the trip. And by adding up all the times, scientists here on Earth can come up with a fairly precise picture of the atomic composition of the comet’s tail.

Unfortunately, the Cometary and Interstellar Dust Analyzer can only come up with the composition of Wild 2’s tail on an atomic level. To get more detailed information on what chemicals and organic matter lie in the vast cloud of dust and gas, NASA wants to bring back actual samples to be analyzed here on Earth.

For this, Stardust is equipped with another device called the Aerogel Collector. From its home at the rear of the spacecraft, this honeycomb of rectangular

Aerogel is a remarkable substance. It looks like cloudy glass but is surprisingly light. When you squeeze it gently between your fingers, it gives a little. But give it a big squeeze and it shatters completely. Obviously it’s no good for making hammers, but it’s great for catching high-speed particles. They smash through the first few centimetres of the aerogel before coming to a rest, embedded in a snug embrace.

After passing through the trail of Wild 2, the Aerogel Collector will be retracted into its protective shell. Two years later, when Stardust meets up with the Earth again, the capsule will be released from the spacecraft, to reenter the atmosphere it left over six years earlier. With just three kilometres left to fall, a parachute will deploy and gently lower it to a final resting place somewhere in the Utah Test and Training Range, about 90 kilometres west of Salt Lake City. The aerogels will then be transported to NASA laboratories for final analysis.

To help NASA scientists see where their multi-million dollar satellite is headed, they’ve equipped it with a navigational camera, which will ensure Stardust’s course takes it close enough to the comet’s nucleus that it will have a good chance of collecting a descent amount of comet debris.

Scientists also hope it will have enough of a view of the nucleus itself to build a detailed 3-dimensional model of it.

Undoubtedly, it will also capture the most dramatic pictures of a comet since the 1986 encounter with Comet Halley.

Sending a spacecraft directly into a dense cloud of cometary particles isn’t the best thing if you want to preserve a spacecraft. Tiny, high-speed particles are believed to have disabled many of communications satellites circling the Earth over the past few years. Even though they are extremely small and light, they carry the same energy as a bullet fired point-blank out of a sniper’s rifle. They also each carry a strong electrical charge that can ruin a satellite’s delicate circuitry. Thankfully for the communications industry, these tiny fragments are extremely rare. But of course NASA scientists expect — and hope — this mission will result in thousands of direct hits. So they’ve done a lot to protect their craft.

Every leading edge of Stardust is protected by a thick barrier called a Whipple Shield (named after American astronomer Fred Whipple, who first described comets as ‘dirty snowballs’). It acts as an extremely thick umbrella that bears the brunt of the cometary dust without exposing any of the delicate parts of the spacecraft — such as the transmitting antennas or solar panels — to the barrage of particles. NASA expects the Whipple Shield will protect Stardust from debris that’s up to one centimetre in diametre.