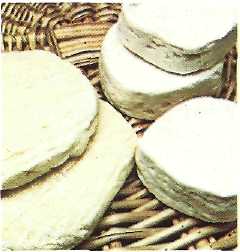 Production area: many parts of Piemonte.

Tomini cheese almost always weight less and never reach the ettogramm 2 ounces. In particular, those of Varaita weigh from 150 to 180 g and those of Rivarolo have a diameter of 5 cm and a height of 2.5 cm.

Cheeses are particularly suited for the summer months, this period can be eaten fresh, after a few hours of life. Seasoned and served are proposed as a tasty appetizer. Law-fat Tomini is prepared with skim milk, of 40 or 60% fat, depending on the seasons and the richness of milk. Then it is added a small percentage of full-fat milk, recently milked. The curd is placed in molds of four inches in diameter and two high. The columns are wrapped in six pieces.

Tomini Cremini: are prepared as above, only the curd, after a pause of 12 hours is removed from the serum and mixed with a certain amount of salt. It is then mechanically pressed and transformed into cylinders. Salting can last about a month.

Tomini Rivarolo: are united united to one another, in column, being seasoned with bay leaves and red pepper. Can be stored in oil and vinegar, and sometimes for their pungency, are also called “electric” tomini.

Tomini Val Chisone: are made with goat’s milk in the valley from which they are named, and lend themselves to treatment as tomini Rivarolo.

Fresh Vercelli Tomini : they are the pride of Vercelli gastronomy. Aroma of pastures fat creamy that becomes a kind of fresh milk, congealed into a paste slightly crumbly, with no acidity or ferment.

Tomini Val di Po: made of pasteurized full fat milk. The processing occurs at five hours after milking. Working is very quickly. At eleven o’clock in the morning there are ready the tomini prepared with the milk collected in the morning.