There is something uncanny about traveling in a car with young children. No matter the size of the car, kids often “get into it” with each other. They tease, torment, bicker, bug or fight. The topics vary among who gets to enter which door, who gets to sit in which position, how close they are sitting together, if someone is bumping the back of the seat, who gets to choose the music, and who gets to choose the volume of the music.

A vehicle’s close quarters often invite altercations and tension. Not that this happens all the time, but when it does occur, no one can escape its effects. Drivers can be unnerved and driven to distraction.

One day, shortly after attending a professional conference on narrative therapy in which the idea of “externalizing the problem” was presented, I found myself in the car with my three young boys about to take a ride when mayhem broke loose. In a flash of inspiration (or desperation), I abandoned my usual practice of turning around, trying to figure out where and how the mayhem started, determining who was responsible, pointing and wagging my finger, and entreating or begging them to stop. Instead, I looked around, adopted a position of curiosity, and began what narrative therapists might call an “externalizing conversation.” 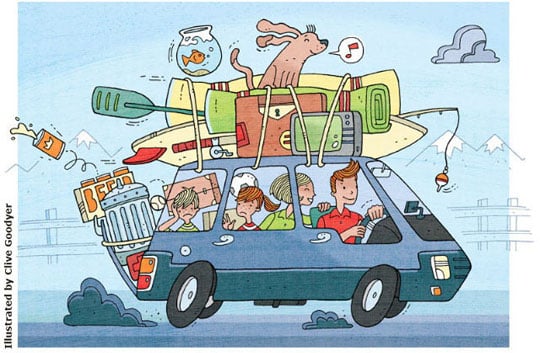 I don’t remember exactly what I said, but I basically told them it seemed that “Trouble” somehow got into the car. Instead of trying to assign blame to one of the boys, I turned the problem into an imaginary entity, or externalized it. I wondered aloud how Trouble managed to get into the car. Trouble was stirring things up and making everybody upset. I solicited their help in rolling down the windows, really quickly, to see if we could let Trouble out of our car right away.

The boys froze and became silent for a moment. I had gotten their attention. They seemed surprised, or shocked, but miraculously, they responded well. They started rolling down the windows in earnest, giggling a little bit, and the four of us worked together to get Trouble out of our car. We cleared the air of Trouble and peace reigned.

Unlike occasions before (and some since, I might add), I felt calm, playful and even creative in the face of a major challenge. I suspect the kids felt a sense of accomplishment and camaraderie. They seemed to have fun getting rid of a problem that we had given a name. We were able to pool our resources and channel our efforts against the problem, instead of turning against each other to “find” the culprit or cause. We were united and we were victorious: Trouble was no match for us that day. Trouble was vanquished, for the moment. It was a moment of parenting I hope I never forget.

So often Trouble rears its ugly head in our lives. It assumes a variety of masks and like Proteus, a figure in Greek mythology, adopts ever-changing appearances to trick us into losing our grip, our balance and our poise. We lose sight of what really matters in our loving attempts to root out and fix the problem. Sometimes, it makes sense to abandon the search for the “cause” and join together to show Trouble the door — or window.