Marith Reheis is a research geologist with the US Geological Survey who studies dust.

Marith Reheis: When I started doing this, I did everything… I would spend at least four weeks a year, driving around in the Mojave Desert from dust trap to dust trap, getting the samples, and having wonderful adventures! I really miss that part of it, actually.

Scientists can analyze the chemical composition of even a single grain of dust. But the way Reheis collects dust is very low tech. She has to design dust traps that sit unattended for years.

Marith Reheis: They needed to be cheap, because there were a lot of them. They needed to be easy to maintain so that if anything went wrong, I could find replacements in, say, Blythe, California, as opposed to having to order them from New York City, and so I came up with an angel food cake pan, and that’s what I still use.

So if you’re hiking in the desert and come across a cake pan – mounted on a steel fence post, filled with glass marbles to hold in the dust — leave it alone. It’s collecting scientific data.

Excerpts from an interview about dust with Marith Reheis

One of the questions, of course, was where this dust was coming from, and …what kind of change was it producing in the soils? So I put out dust traps. It wasn’t completely a unique idea, people had done it down in New Mexico 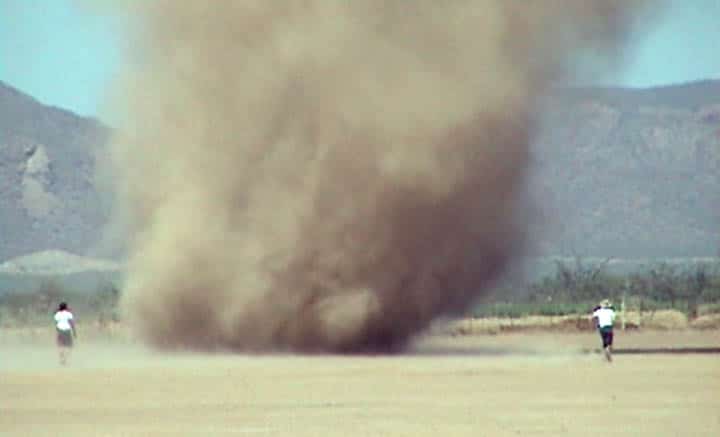 It’s just a pan, or some kind of container, either on the ground, or somewhere farther up in the air above the ground that catches dust. And then you can wash the dust out and analyze it. See what it’s made of, what grain sizes it’s made of, and so forth. What it actually is constructed of depends on the person.

You can put a grain on a mount and both look at it physically in huge magnification, but also determine exactly the distribution — it’s like a map — of the elements in that grain. So if it’s a grain of quartz — SiO2 — you can actually map the distribution of silica.

Most of my time now is spent trying to analyze the data. And I do very little of the actual dust collection… when I started doing this, I did everything, and for many years, for ten years, I would spend at least four weeks a year, driving around in the Mojave Desert from dust trap to dust trap, getting the samples, and having wonderful adventures! I really miss that part of it actually. My husband probably doesn’t miss it, because I was gone a lot.

I’m one of those people who despise staying in motels and think fieldwork should be done by being out there. So I would pick up a field assistant and load up, stuff my car with camping gear, and just go. And I really enjoyed that. After collecting samples, takes a couple of months of lab work to analyze it…

A lot of people do pieces of the task. So, one person is responsible for doing the particle size, and the conductivity and soluble salts measurements. A second person gets a split and they do the organic and inorganic carbon. And a third person gets another piece, and they do the phosphorus fractions to look at soil fertility. A fourth person does carbon and nitrogen isotopes, if we have that much sample. Another person will do extracts of human toxicity effects. It goes on and on. It just depends on how far we can milk the sample in terms of sample size.

These dust traps, because they had to be, they were sitting out, and they still do, for a year at a time, as much as a year at a time, with nobody checking on them. And they needed to be cheap, because there were a lot of them. They needed to be easy to maintain so that if anything went wrong, I could find replacements in, say, Blythe, California, as opposed to having to order them from New York City, and so I came up with an angel food cake pan, and that’s what I still use.

At each site, typically requires a hike of at least a half a mile, and sometimes as many as two or three miles because of placement and because it needs to be way away from roads…I don’t want people knowing where these are, because they can’t resist. The nice ones just sort of look at them and take few marbles. But more often, in those kinds of areas, they tend to use them as shotgun targets

Being able to really tell people who don’t know anything about geology. They say, “What are you doing out here?” I say, “I’m collecting dust.” “Ha ha ha want some from under my bed. And because we know enough now to be able to say with some certainty that yeah, but it’s the dust in the soils that allows you to grow crops, because it’s dust coming from other places that replenishes the nutrients that plants need to grow. That gets their attention. That gets them to sit up and say, “Oh! You really do do something interesting.

The first five, ten years that I was doing this work, it was basically a big joke to most of my colleagues. There was not a whole lot of appreciation for why it was necessary to go out and collect dust samples.