If you hike from the desert floor near Panther Junction up to the Chisos Mountains, you’ll notice that the plants change quickly as the elevation increases. Big Bend elevations range from about 2,000 feet along the Rio Grande to over 7,000 feet in the Chisos Mountains. Generally, the higher up you go, the less hot and the less dry it is.

Century plant and rock lichens, Lost Mine Trail (December, 1993) The point where Lost Mine Trail turns away from Casa Grande is a common resting place for hikers on the trail. Plants near here, free from the stunting shade of the mountain woodlands, are shaped by the sun and wind of the peak.

We humans consume a lot of water. Experts advise each visitor to carry a gallon of water for each day they spend in the Chihuahuan Desert. Spend some time in the desert and you will find that we simply weren’t built for this environment.

Mesquite trees search for water deep below the ground with long tap roots. They have more wood underground than above ground. Like most other desert adapted plants, they grow very slowly. Their small, dry leaves help them conserve water. They also have thorns which discourage thirsty animals from eating the leaves. Every leaf that a mesquite tree has to replace requires extra water.

“My favorite desert adapted plant is the ocotillo,” said Gentry Steele. “It’s a bunch of spindly, twisty sticks—they look dead to all the world. Then a rain comes . . . and boom, it has red flowers and small, simple leaves. After three weeks with no rain, the leaves start falling off. That’s as close to an animal’s hibernation as a plant gets.”

He added, “The other plant I would mention is the creosotebush. You go in the desert lowlands in Big Bend, there are fewer plants than in the grasslands, fewer numbers and kinds. The predominant shrub is the creosote. It’s gnarly, with dinky, drier leaves . . . they tend to be evenly spaced around. Creosotes have developed an unusual defense—they exude a chemical from the roots and stems that acts as a plant poison—a growth inhibitor that keeps grasses from growing around them.” 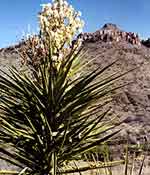 And Dr. Steele said that animals have their adaptations too. He mentioned geckos, with their translucent skin and big eyes. Geckos are active only at night, when they hunt for scorpions, bugs and spiders. “The name of the game for animals is avoidance,” Steele said. “Plants don’t have a choice, they’re rooted. They can’t run away and hide in the shade—they can’t migrate. But the way that animals deal with the desert is to avoid the heat as much as possible. As an animal, I too was active at cooler times of the day—early morning and evening.”

One way to deal with the lack of water is to hold on to every drop that comes your way. For example, human urine is about 95 percent water. The desert turtle—a tortoise—excretes uric acid crystals which only contain one to five percent water. It’s solid urine, not liquid.

Meanwhile, when desert turtles find water, they can drink enormous quantities—some have been reported adding over 40 percent of their body weight. Also, to avoid the heat, desert turtles have been known to burrow as far as 30 feet below the surface.