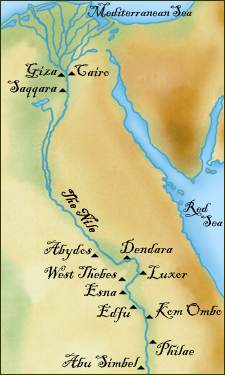 The temple at Dendera is less popular for tourists than many of the other places in Egypt but holds a strong historical significance. At the waning of the Egyptian civilization, the Greeks and Romans were in awe of the power and intelligence that the Egyptians developed.

They appeared to have come with a desire to conquer yet an eagerness to learn from the Egyptian advancements, adopt some of the ancient rituals and bow to their mysterious gods. They tried to incorporate much of the basis of the ancient civilization into their own. It has been argued that the temple at Dendera is in fact an homage from these subsequent civilizations, to Hathor, the goddess of light and beauty.

While Cleopatra reigned as Pharaoh (at the dwindling end of the ancient Egyptian civilization, approximately 100 BC) she was worshipped in the temple at Dendera – the temple had been built for Hathor, the goddess of light and beauty.

During her reign as Pharaoh from 51-30 BC, Cleopatra was also worshipped at the temple here and her name and that of her son (from Julius Caesar) had been chiseled into its stonework. Despite this temple being a tribute to the goddess of light and beauty, Cleopatra was not as beautiful as Hollywood may have led us to believe. She was believed to be of moderate beauty, certainly not the glamour that Elizabeth Taylor’s portrayal may have implied. 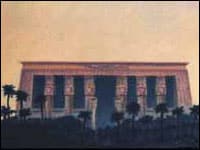 Temple dedicated to Hathor, at Dendera.

Apparently, once a year, to demonstrate the bond between Hathor and her mythological husband Horus, they would carry symbols of Hathor down to the temple in Edfu, which is dedicated to Horus.

Thoughts and impressions for: "Ancient Egypt – What To Know about Dendera Temple":