The Nile is the longest river in the world, running in at 6,738 km in length. The Nile has played a pivotal role in the development of the vast and incredible ancient Egyptian civilization. Some experts say that its historical annual flooding from July to October is one of the predominant reasons why the ancient civilization was so successful: every annual flood would leave a new layer of soil for the Egyptian people to cultivate.

The main tributaries of the Nile are the White Nile, the Blue Nile and the Atbara River. The old seasonal river floods have been moderated in more modern times by the Aswan Dam (south of Luxor), which was constructed at the turn of last century and renovated again in the 1960s.

What to Know about the Nile 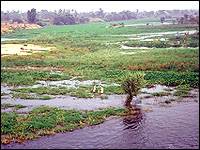 The Nile itself flows from South to North. This phenomenon affected how Egyptians perceived their geography – the Egyptian word for upstream came to mean South, and their word for downstream came to mean North. The Nile ends in what is known as the Delta, named for its shape – triangular, resembling the Greek letter. This area is the most fertile place in Northern Egypt.

In ancient times there were over a half a dozen branches of the Nile in the Northern Delta. More recently, the slower moving water (from the damming developments of the 20th century) and the accumulation of silt has reduced the Nile to two outlets that feed into the Mediterranean Sea – the Rosetta to the west, and the Damietta to the east.

More information about the Nile from Kaylon, one of our reader:

The River Nile is about 6,670 km (4,160 miles) in length and is the losnget river in Africa and in the world. Although it is generally associated with Egypt, only 22% of the Nile’s course runs through Egypt.In Egypt, the River Nile creates a fertile green valley across the desert. It was by the banks of the river that one of the oldest civilizations in the world began. The ancient Egyptians lived and farmed along the Nile, using the soil to produce food for themselves and their animals.Egypt is situated in the northeast corner of the Africa. Covering 386,662 square miles, it is almost twice the size of France and the twelfth largest country in Africa.

To the north of Egypt is the Mediterranean Sea, to the south is the Sudan, to the west is Libya and to the east of Egypt is the Red Sea.The Egyptian writing called hieroglyphics used pictures to represent different objects, actions, sound or ideas. There were more than 700 hieroglyphs. Some pictures stood for whole words.Egypt is a hot country and so people wore lightweight clothes which kept them cool. We can see what they wore from the many paintings and sculptures they left behind.Ancient Egyptian clothes covered most of their skin and were made from plant fibres such as linen.Pharaohs were the king or Queen of Egypt. Most pharaohs were men but some well-known pharaohs, such as Nefertiti and Cleopatra, were women.A Pharaoh was the most important and powerful person in the kingdom. He was the head of the government and high priest of every temple.The people of Egypt considered the pharaoh to be a half-man, half-god.The Pharaoh owned all of Egypt.