Do couples who stretch together kvetch less together? From the husbands and wives I talked to, that seems to be true.

Bikram yoga and other vigorous forms of Hatha yoga, such as Ashtanga, offer a perfect balance for both sexes. Whereas women often have the flexibility advantage, men have the core-strength edge. While couples can do yoga classes together, they are not competing with each other. No one leaves mad; and besides, except for a lightweight yoga mat, there’s nothing to throw.

For the last three years, Paula Bonney, a bookkeeper from Mattapoisett, Massachusetts, and her husband, Steve, a contractor, have been taking Bikram classes together at Yoga for You. Paula talked Steve into coming with her after he had surgery on one of his rotator cuffs. “Steve hates the heat. After the first few classes, though, he said he’d consider maybe coming twice a week,” Paula says. “Then after a while, that became ‘Maybe I’ll go three times a week.’ Now he’d go every night if we didn’t live so far away.”

“I’ve definitely noticed a change in Steve,” says Paula. “It’s really helped him take things in stride. He’s much more on an even keel. Besides, it used to be we’d fight about the heat in the car. Now I get to put it on, and he doesn’t care.”

Real Men Who Do Yoga and the Women Who Love Them 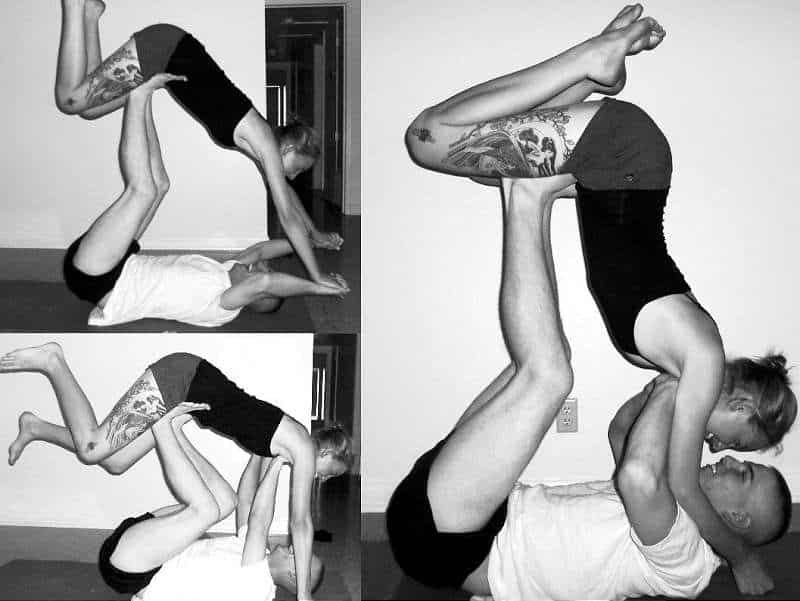 It’s not always the woman who does the initiating. “It was absolutely Bob’s idea to start yoga,” says Elizabeth Curran, a marketing manager for Tyco. Bob is Elizabeth’s husband of five years and one of the most unlikely-looking yogis you’ll ever encounter. A plumber and weekend hockey player, he stands six feet four inches tall and weighs 260 pounds.

“Bob did all the research and set it up,” says Elizabeth. “He was tired of the gym and wanted a change. He really likes a workout and wanted something where he’d sweat a lot. I had been a runner, but I was bored and needed a change, too.”

The Currans took a hot yoga class at the Open Door Studio in Braintree, Massachusetts. Although it isn’t Bikram, it is performed in a room heated to 100 degrees or more. “We were instantly addicted,” says Elizabeth, and although they’ve only been going for a few months, they say they’re in for the long stretch. They go several nights a week.

So far, Bob’s one of the few guys taking classes at Open Door. “The girls come up to me and say it’s really nice to see a normal guy in here. They say they’re trying to get their boyfriends to come, but they won’t. I can see where some guys may have a problem going. The yoga masters are different from the guys you see in the locker room, the guys you played sports with in college. But if you can’t get past that, you can’t get through much else, you know?”

“A big part of our enjoyment with yoga,” says Elizabeth, “is having something we can do together that’s on a mutual level. He has golf, but when we play I’m a beginner, and he’s real experienced. Yoga’s a thing where you’re totally even.”