After many years of trying to get pregnant and two marriages, I discovered two days ago that I am pregnant based on the results of a pregnancy test. I was so happy that my husband and I decided to go for a sonogram yesterday. The doctor told us that I was indeed pregnant, but that the sonogram could not locate the embryo either because it was too small or because it was located in one of my tubes. They have started a series of Beta blood tests and will let me know the results next week. I told the doctor that I have had a constant pain on the right low side of my stomach for over six days, but he said that I should not worry. Last night I had so much pain on my right ankle and foot that I broke down in tears. It felt as if my bones were breaking in half. A friend told me that an ectopic pregnancy should end no later than six weeks or it could be life threatening or the tube could explode and ruin my chances of ever getting pregnant again. Please advise me on this matter. Becoming a mother has been my dream for so many years and I am just devastated.

Sounds like your doctor gave you good advice, Even with the fanciest ultrasounds, it is difficult to locate a pregnancy that is less that six weeks along. The good news is that an ectopic pregnancy is unlikely to rupture at that early a point. The reason he asked you to do blood tests was to measure the amount of the hormone that gives you the positive pregnancy test. The so-called “quantitative beta preg” usually doubles every two to three days with a good healthy pregnancy. In either an ectopic pregnancy or a pregnancy that will end in miscarriage, the values do not rise like that. By the time the blood level reaches 2000 units, you should start to see something on a vaginal probe ultrasound. 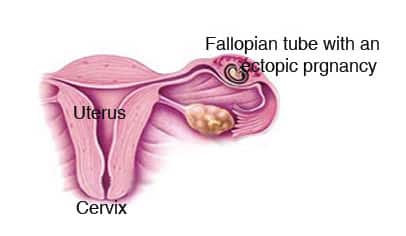 Many women feel lower abdominal discomfort early on in a pregnancy. Almost all women have a small cyst on the ovary, which is actually making a hormone called progesterone to help keep the pregnancy going. And sometimes these little cysts can become quite large; I had one patient who had one 4 inches wide — and it went away during the pregnancy.

If you should start feeling a lot of pain, and your caregiver has warned you about “ectopic precautions,” you should call her right away. If there is any question about a leaking ectopic, we can do a small operation with a laparoscope — a small tube with which we look into the pelvis. If we do see an ectopic pregnancy, we usually can remove this through the laparascope, and save the tube.
If we do diagnose an ectopic pregnancy very early in its course, we also can give a medication known as methotrexate. This drug in larger doses is used as a chemotherapy drug for cancers. But in a low dose it can treat an ectopic pregnancy, causing it to get reabsorbed, and saving the patient surgery altogether. Chinese physicians have been doing a similar approach for many years, using herbal medicines similar to methotrexate.

So the bottom line, Carol, is that even if this were to be an ectopic pregnancy, you should not stop those motherhood dreams — lots of ways exist to preserve all opportunities.