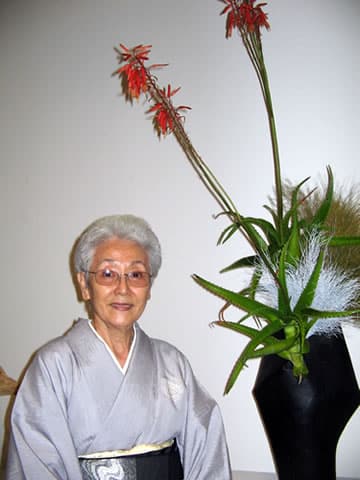 Ikebana is an ancient art of arranging flowers or beauty expressed in arranging materials which may include branches, fruit, vegetables, rocks, shells, weathered wood, etc. The art is believed to have begun in 810 AD in China with the custom of making floral offerings to Buddha. Buddhism came to Japan from China via Korea early in the 6th century. A priest by the name of Ono no Imoko became the guardian of a temple in Kyoto, Japan and lived near a pool in the garden. The dwelling was referred to as ike-no-bo, the hut near the pond. Since the first arrangements were made there in that dwelling, this was the beginning of the Ikenobo School of Ikebana.

Early arrangements called “tatebana” were made for special events and ceremonial occasions with prescribed rules as to of the use of materials, shape and containers. Later the fundamental rules and principles of the Ikenobo School of Ikebana were established by Senke Ikenobo, the 12th Headmaster. Then the rikka style was developed which was a large complex arrangement suggesting a mountain arrangement landscape scene. Then a simpler and smaller form was developed called “nagiere”, and later “seika” and “shoka” forms. These two styles combined the dignity of “rikka” and the informal simplicity of “nagiere”, and could be used in Japanese homes. Up until this time most of the arrangers were men. By 1880 young Japanese women were being taught Ikebana. The emphasis was on the three main lines arranged in an asymmetrical triangle.

In 1897 the Ohara School was founded by Ohara Ryu, and a new style developed called “moribana.” Even the water in the moribana container became part of the design. Creative originality became more and more important with all kinds of new materials available. A Japanese sculptor, Sofu Teshigahara founded the Sogetsu School in 1927.

These three schools, Ikenobo, Ohara, and Sogetsu, are the three major schools of Ikebana, but there are over 2,000 different schools today. One of the more popular schools is the Ichiyo School founded by Meiko and Ichiyo Kasuya, brother and sister. It was founded in 1937. Their focus is on arrangements for personal surroundings and public spaces. The Chiko School was founded by Mrs. Kao Naruse. Seasonal materials and art objects are combined in harmony to create scenes of “ikebana-morimono.”

The spread of the interest and love of this beautiful art is largely due to Ellen Gordon Allen, the wife of an army general stationed in Japan. It was her idea to create an organization dedicated to the study of Japanese flower arranging and related arts, and to the cause of world peace and understanding. Ikebana International has spread to 61 countries with over 20,000 members and 200 chapters around the world. Washington, DC has the distinction of being Chapter 1. They urge you to take advantage of this excellent opportunity to enjoy and learn more about the living art of Ikebana.