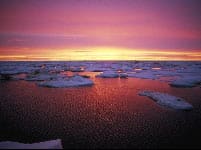 Today, thanks to radar technology, the risk posed to ships by icebergs is a lot better than it was in 1912. But these building-sized blocks of glacial ice remain a major threat to some of the most important ships and structures we have in the Atlantic Ocean.

According to Colin Stock, an Environment Canada iceberg specialist in St. John’s, Newfoundland, the Greenland ice sheet produces about 20,000 icebergs annually. Thankfully, because of the long and circuitous route they take to get to the Atlantic Ocean, fewer than 500 of them ever make it to the waters south of the 48th parallel in a typical year. And those that do, rarely pose a risk to large ships.

“These days, with radar technology being what it is on ships, bergs are easily spotted — especially the large ones — 20 to 30 miles away depending on how rough the sea is,” Stock says. 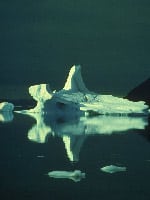 “But what becomes a hazard, especially in any heavy seas are the smaller bergs — or the bits and pieces that break off the bergs that get hidden in all the swells. Of course, you get a small berg hidden in the trough between two fairly large crests and the radar won’t see it.” A block of such ice may be only a few metres in diameter, but can weigh in at several tonnes and can seriously damage any ship not specifically designed to deal with ice. In cases like this, he says, there’s no substitute for the watchful eye of a ship’s helmsman. “I’ve seen it myself, working up in the Arctic. A Greek ship ran into a bergy bit in the Hudson Strait in the Southern Arctic and it tore the whole front of his bow off. And then in the early 80s, off the coast of Newfoundland, we had a commercial vessel do the same thing. It came steaming along westward without due caution or attention and tore the bow out of her.”

In both of these cases, Stock says, the crew pumped water out of their ballast tanks to make the ship float higher in the water. That kept the hole above the waves and there was no loss of life. This obviously didn’t happen back in 1912 with the Titanic. Her famous double hull proved insufficient to survive the impact with the iceberg and she sank within about four hours. “The problem with the Titanic was that they weren’t overly cautious,” Stock says. “There were warnings about ice in the area and in my opinion they should have slowed down and just crawled through there. But it was just ‘full steam ahead’. And with no radar in those days, whether the visibility is good or not, if you’re doing 20 knots when you see an iceberg like that it would be difficult to manoeuvre safely.”

In a way, it was thanks to the sinking of the Titanic that Stock and his counterparts at the International Ice Patrol have their jobs. Today, planes crisscross the frozen expanses of the North Atlantic searching for stray bergs, plotting their position and determining where they are headed. This information is important for ships that ply the Northern Atlantic sea lanes, as the Titanic once did. But it’s also important for oil rigs, pipelines and even underwater well-heads that could be badly damaged by a marauding iceberg.

Even the enormous Hibernia oil platform, with its thick walls of reinforced concrete, was designed from the beginning to withstand a collision with a six-million-tonne iceberg without serious damage. But obviously it’s best to avoid such confrontations. And the best way to do that is to understand the movements of your enemy.

“But forecasting iceberg drift is notoriously difficult to do accurately,” says Dr. Richard McKenna, the director of Ice Engineering at the Centre for Cold Ocean Resources Engineering in St. John’s. “This is because ocean currents are the driving force behind icebergs and these patterns are incredibly difficult to predict.”

Yet when forecasts do spell trouble for an oil platform there is a solution. It’s right out of the Wild West: lasso the bothersome berg and drag it into less threatening currents. But moving a block of ice that’s many times heavier than most large ships isn’t easy. 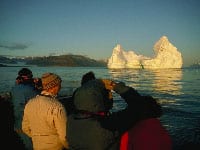 “You have to tow for a long period of time and therefore you need to start towing an iceberg when it’s a good distance away from whatever you’re trying to prevent it from hitting,” McKenna says. “But if you don’t know where it’s going, you don’t know whether you’re towing it into the path of the structure or away from it — average drift speeds are about 1 knot on the northeast Grand Banks.”

Of course, studying icebergs up close has its own dangers.

“Where you’re anywhere close to an iceberg, you can have a large amount of ice fall off or it can actually roll. Usually you get a little bit of warning when they are about to roll, but sometimes they can roll pretty quickly.” Icebergs can also ‘calve’ or crack in two pieces and when that happens, the shifting masses of ice can trigger a dangerous wave. “It could swamp your boat. But small boats often go right up close to these icebergs and it’s surprising there aren’t more incidents when people get hurt.”