Just when we thought runaway bride Darva Conger had finished with her 15 minutes of celebrity, she was back in the spotlight in a bare-all Playboy layout designed, I suppose, to titillate all those who were just dying to see her naked. Someone on “Politically Incorrect” quipped the other night that at least her ex- bridegroom, Rick the erstwhile millionaire, would now get to see her naked.
Even for a culture brain-numbed by the year-long Clinton-Lewinsky scandal, by Frank Gifford getting caught cheating on Kathy Lee, by Marv Albert spanking his lady friend, this pictorial in Playboy hits our sleaze button and makes us want to dish with the best of them. It has Matt Lauer and Larry King breathlessly asking Darva questions about things like her motivation and her future prospects and, oh yes, her character. Puh..leeze. 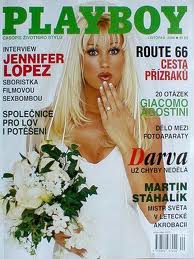 Here is a woman who says she made a dreadful mistake agreeing to enter a contest in which she might have to marry a stranger. She married the stranger, then divorced him, losing no time in telling everyone she is “not that kind of girl.” She swears she does not want to profit from the sordidness of it all. And then, surprise, surprise, we find that Darva is not Rebecca of Sunnybrook Farm, not Jane Eyre, but a woman who has a price. Playboy made her an offer she could not refuse.

But she was adamant with Larry King that she is an honest woman. “There is no air brushing on these photos. Everything you see is mine,” she said. Then she amended her statement slightly, saying Playboy did use hair extensions on her to give those blonde tresses volume.

Well, where is Truman Capote when you need him to chronicle the true silliness of pop culture?

If anyone has ever wondered whether sleaze has a life of its own, wonder no more. The last bit of voyeurism takes place this week as those who care peer at Playboy. As the culture embraces the thrills of watching everyone else’s lives — from CBS’s wildly successful Survivor and “Big Brother” — it seems we desperately want to watch people behaving badly.

Poor Darva, whose resume on the millionaire show made her sound like the Joan of Arc of emergency room work, is now reduced to a cartoon of herself. She says she is talking to some people in Hollywood about hosting a TV show. This leaves even Larry King speechless. Watching this exchange, I was reminded of Cato Kaylin during the O.J. trial and how he thought he would soon be a big star because everyone wanted to hear what he had to say. Yeah. Right.

It is terribly sad , in the 21st century, to see women still being treated like sex objects. But it’s a lot more shocking to see them behaving as if the ARE sex objects.