This year the rose problems have been a bit different from other years. I thought it might be useful to list some of these to assist Master Gardeners when clients present problems with roses.

1. Symptoms of the first problem: In early June blossoms failed to open up normally This is referred to as “balling” of the blossoms. The edges of the petals were brown. The symptoms are more likely to occur on light colored roses. There are two possible causes listed in the textbooks. The first is botrytis, which occurs when we have periods of damp cool weather, so that’s hardly the cause this year. The second possible cause is an invasion of thrips. To check this, I opened the blossom and examined the petal base areas. There I found small, (1.0 nun) tan insects running around. Thrips do their damage by sucking juices from the petals. The trails for their successive penetrations shows a rasping pattern. Was this the cause? It appeared reasonable with all the hot dry weather we have been having. The thing that bothered me a bit with this conclusion was that not all opening blooms had thrips in evidence, Also, I noted that a week later many of the blooms opened up normally with no sign of the balling, browning phenomena.

This led me to take samples of the affected blooms and those not affected to Ethyl Dutky at the University of Maryland. After taking a look at the samples under the microscope, and reviewing my observations, it was Ethyl’s opinion that the principle cause of the problem was heat damage which resulted from the high temperatures in early June to plants that were under some heat/ drought stress during the preceding period. When I noted that the foliage appeared to be in good condition, it was pointed out that the blossoms are more sensitive to heat damage. It was also noted that the weather history shows this spring to be the, worst in more than 100 years with regard to the drought and high temperature records. The microscopic examination did show the presence of some bacteria and fungi, but it was the opinion that they came along after the damage had happened.

What is the control for this type of problem? As can be seen by the time line of events, a degree of patience is appropriate. As always, good cultural conditions are important, such as providing the plants with adequate water. But sometimes Mother Nature comes along with a record breaker, and The plants respond accordingly. 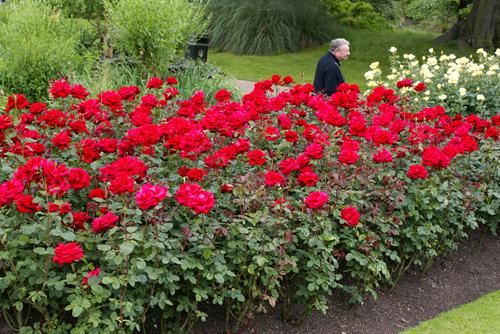 2. A second unusual problem this year is the occurrence of a shiny surface on some leaves. This results from an accumulation of honey dew secreted by aphids that arc harboring on the underside of leaves above those affected. I have never found aphids to be a threat to the rose plant. If the gardener can’t tolerate the sight of the honey dew layer, which can develop into a black sooty mold, one control is the application of an insecticidal soap or summer weight horticultural oil. To be effective, the material should be placed in contact with the aphids.

Looking ahead, the Japanese beetles are due any day now. It is hoped that the population will be limited as a result of last summer’s drought. But with the past mild winter, we may be seeing greater numbers than normal. A recommended control is the tapping of the part of the plant where the beetles are feeding to make them into a pan of a water solution of soap or detergent held under their feeding site. This is easy to do since the beetles are generally easily seen working on the top of the plant. Remember that although Sevin is labeled for control of the Japanese beetle, the repeated use of this material can cause the death of honeybees, which are in very short supply. It has also been found to result in large outbreaks of spider mites, since Sevin tends to kill the predators of this pest. So Sevin is of questionable value.