The Significance of the Cave 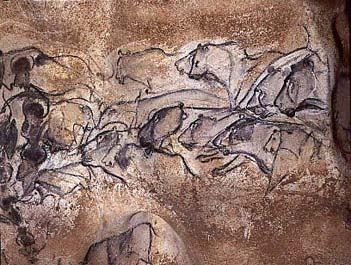 The discovery came as a shock, and even non-specialists could recognize its originality and distinction. This response was caused by several aspects. The first is the kind of animals that were primarily represented here, namely rhinoceroses, lions, and bears. Generally, the animals depicted in Paleolithic caves are animals that were hunted, even though their proportions are completely different from those of the animal remains found during the excavation of dwelling places. In the Chauvet Cave, dangerous beasts, which were not part of a Paleolithic diet, are predominant (more than 62% of the identified animals, if one adds the mammoths).

Horses standing in parallel and superimposed on a previous drawing representing aurochs from which they keep the line of the back, in the upper right part. The horn behind the second horse is also remaining from the previous drawing. Notice the supernumary mane which reinforces the impression of quantity and the perspective already emphasised by a progressive curvilinear bending of the heads (“polar vision”). The shaping of the lower jaws is made with a stump and the line of the nostrils is finely outlined by scraping, to the detriment of the rhinoceros’s back.

Equally astonishing were the techniques that were employed here. The animals are portrayed through stump-drawings, and there are even experiments with perspective. These refinements are in sharp disagreement with the representations we are accustomed to.

Another feature attesting to the high quality of the illustrations is the aestheticism both in the rendition of individual works and in the arrangement of groups in vivid and dynamic compositions. A great number of black paintings resemble each other so much that they must have been created by the same distinguished animal painter, who was a master of detail. At the least, it would have been one artist joined by participants, such as students or helpers, who shared his particular methods and techniques.

The location of the Chauvet Cave in the Ardèche changes our bias on decorated caves. Up to now, it was generally acknowledged that major centres of cave art existed in Périgord-Quercy, the Pyrenees, and the coastline of the Cantabrian region. The remaining caves apparently constituted minor groups, such as those in the Ardèche, the Meseta and the South of Spain, Southern Italy, and ultimately some others scattered here and there. This latest discovery in the Ardèche, which followed that of the Cosquer Cave, illustrates the extent of our ignorance of the subject, inasmuch as it is still possible for caves of great importance to be discovered in districts outside the important centres. With the Chauvet Cave, the Ardèche takes its place among the «classic» domains of prehistoric cave painting.

The Cosquer Cave is located at Cape Morgiou, in the Calanques, near Marseilles. It can be accessed through a tunnel 175 meters in length, which is 37 meters under the sea level.

The unique feature of this cave is that it contains several dozen works painted and engraved between 27,000 and 19,000 years ago. 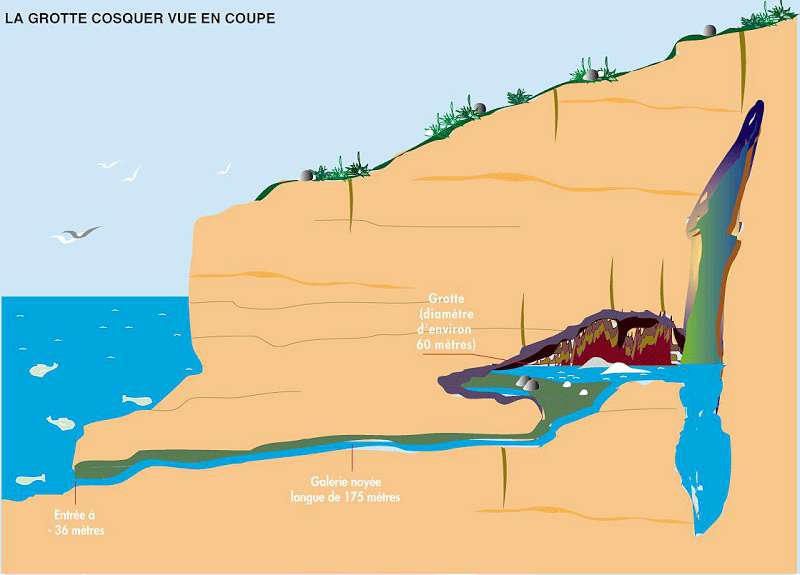 It is decorated with a variety of land animals, but also with seals and auks, fifty-five hand stencils, dozens of geometric symbols, as well as the extraordinary representation of a “killed man”.

In order to protect this exceptional site, but also for safety reasons, the cave is closed to the public. A three-dimensional reproduction of the cave was created by Electricité de France, permitting a “virtual visit”.